It’s been a long time since my daughter and I had afternoon coffee at the beach.  We used to do it once a week when she lived at home year round.  We sit in the car, stare at the ocean, sip our drinks and catch up on what’s going on.  But, since she’s been home from school, it’s taken a while to get into a routine.
Today she wasn’t scheduled at either of her two summer jobs though, so we made a plan.  Once I returned from work, we’d go to French Memories, get our coffee and head off. Only, as I pulled into the driveway, a rolling grey cloud covered the western horizon, and thunder rumbled overhead.  Usually I’m the one saying, “It’s okay, let’s go anyway,” but today she uttered the phrase, and she, God bless her, had her camera in her purse.
The drenching rain began as we pulled out of the driveway, and lasted long enough for us to get soaked running into the coffee shop, but by the time we got to the beach, it stopped.  The remnants offered an amazing photo opportunity.  Pregnant gray clouds scuttling above a green sea, yacht club sailboats floating under storm clouds while back-lit by the afternoon sun—a line far out to sea, framing the mouth of the harbor.
There’s everything to be said for a hot cup of coffee, a camera and a good friend, especially when combined with a spring storm. 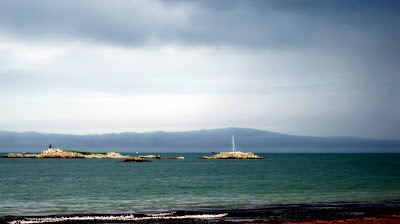 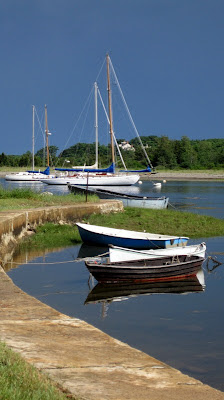 Hope you all have a great weekend!
Posted by Liza at 6:00 AM

Wow, those pictures are so beautiful. What a nice memory for you and your daughter too and to spend that kind of time together--even wet. :)

That first one is amazing! Something to be said for summer storms. Glad you guys went anyway.

Great pictures. With all the summer storms that will be hitting soon, I'll have to take lots of pictures this year. Maybe I can even get in some cool lightning shots (as long as I don't get hit. Cause that sure would suck!).

Oh the power of these clouds!!! Wonderful!!

Yay for coffee and creativity and company! Take care
x

I love big storms. We don't get good storms out here in Los Angeles.


Lee
A Faraway View
An A to Z Co-host blog

Gorgeous photos and French Memories has to be the most perfect name for a coffee shop ever!

There’s everything to be said for a hot cup of coffee, a camera and a good friend, especially when combined with a spring storm."

Your story reminded me of when I was in my early 20's and my mother and I would meet every Saturday afternoon, go to McDonald's and split a Big Mac, and then go shopping.

It sounds so simple, but I miss those days.

Beautiful photos and scenery! I lived on the coast of Maryland for many years and really miss the beach. Thanks for stopping by!

Gorgeous photos! And I love storms and the rain and if you can share them with great company? Even better!!

Breathtaking. Don't you just love how the sky and sea are ever and constantly changing. Never a dull or boring moment.

I'm glad you had time with your daughter.

The sight of storm clouds rolling in always makes me stop and stare. Great photos, liza!

This is totally my idea of a heavenly time - sea, storm, daughter (or in my case step-dot).
And that first picture is breath-taking. Thanks for sharing girl!

What a treasured memory. I love that your daughter was the one that said to go anyway. It says a lot about your relationship. I'm always touched when my oldest, who is a few years younger than yours, makes an effort with me. I'm hopeful that someday it'll be like when she was little again and wanted me around all the time. Maybe it won't be like that ever again, but I long for it anyway.

The pictures are stunning as always. Makes me want to go there so much. Why oh why must I be surrounded by corn fields????

Just stunning, Liza! It's so nice that you're able to share times like this with your daughter. I've said it often, but I can't help but be a bit envious when I come by and see the gorgeous photos that you take. I truly think I must have lived by the sea in another lifetime. LOL The draw is just so strong for me. It's actually getting to the point where our Fall trip to the coast isn't enough. I've told Hubbs that we're just going to have to head over for a few weekends during the summer months, so that I don't go through total withdrawal. ;~) Thanks a million for all of the times that you pop over to say hello... Your thoughtful comments ALWAYS make my day! I truly hope that the rest of the week and the coming weekend are full of memory making moments like these! ~Mary

I used to do this all the time when I lived on the Oregon Coast. Thanks for the memories....