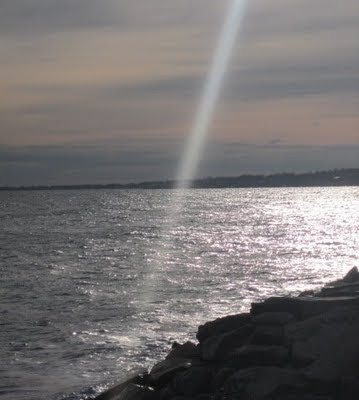 Sometimes you don’t know what you get until you see the picture--the same way you don’t really see what you wrote, until you wait a suitable spell and reread.

In this case, the sea was back-lit by the sun skulking on the edges of fast moving clouds. The wind by the water snapped like a clammy dishtowel in the hands of a teenage boy, stinging, damp and musty. One lone seagull sat on the iron bars of the seawall, facing the wind dead on. With ruffled feathers he shifted his weight from foot to foot, leaning on the force of the air, unlike his peers who beat their wings, gliding on the rising currents above. Behind the bird, there was a promise of sunshine, a deepening pink to the eastern sky, and a ray refracting from the camera lens, unseen until I reviewed the picture.

When I plugged the memory card into the computer, the stream of light reminded me of writing. For a while now, I’ve resisted going back and reading my old posts, afraid that a spotlight would highlight my naiveté like the cast off diary of a sixteen-year-old. This weekend though, I clicked back, through March and May, August and for the most part, cringed. In a few posts though, there were moments of clarity, a beam of light invisible at first to the naked eye, but upon a revisit, filtering down, pointing to a gem, something beyond the screen, a nugget of out reach, an idea it might be possible to dig up from the sand and slowly develop into treasure.

Do you go back and read your old posts? What do you find? 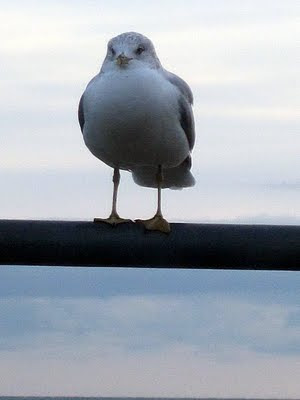 The last time I did that, I deleted a bunch of my earlier excerpts—about 2 weeks ago. It felt great. A lot of my other, earlier posts are eye-roll-worthy, but I don’t have that many post to begin with. I don’t dare read them, otherwise I’ll be tempted to put them out of their misery.
As always, your writing is so evocative. I love your metaphors/similes.

Yes, I do,lol.. I now understand the need for rewrite. besides I sometimes forget Billy Ray and Hank did last time. I think I have a plan though. How is your Imagination? lol

I haven't been brave enough to venture back. I'm sure there are lessons buried beneath the mountain of my words, begging for release.

I love how you evoke such emotion with each post- thanks Liza!

I do occasionally go back. Sometimes I'm just curious about what I was doing on a particular date a year ago, or even two years ago at this point. I'm extremely thankful that the posts have preserved some memories I may have otherwise forgotten, and am comforted by that...

Wander to the Wayside said...

Absolutely! Especially since I added'you might also like" under the posts. I'll 'pretend' that I'm a visitor and try to see it thru their eyes. I rarely change anything, unless it's a spelling or grammatical error. I love seeing what I had to say, and hope whatever it is strikes a cord in someone else. I probably wouldn't have as critical an eye on my stuff as you would have on yours, since I'm not an aspiring or published writer, so I would really have no reason to make changes in what I've already written.

Liza, the path taken to get to this post must have been the best way for you to get here. To me, changing past writings is akin to erasing parts of who we are. How else can we evaluate our progress?

This post is so beautifully written. I could feel the cold wind on my cheeks and smell the salt air. I felt myself watching the seagull. Ah how I miss the shore line. You took me there again for a moment. Thank you.