My Cubby over the Stairs 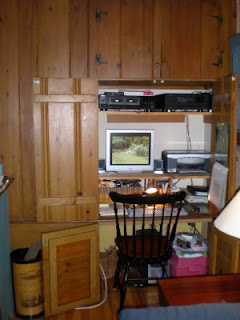 I find myself acting territorial now that I’ve been at home almost two months. As I mentioned, prior to the delivery of my pink slip, we finished redecorating the dining room which, along with a cherry table and bone china, also housed our computer. This was never a good thing when we hosted around 30 extended family members on Thanksgiving. Each year, during the fourth week of November, we’d have to unhook the cables, stuff the monitor under the dropped-leaf side table it rested on, and cover the whole tangled mess with a freshly ironed tablecloth.

Next Turkey Day will be easier now that tiny technology has allowed us to move the computer into its current cupboard location. For years, we’ve used the family room cabinet to store old record albums (yes, I said albums) and a collection of CD’s, VHS tapes and DVD’s. But the introduction of three I-pods into our house, all downloaded with expansive play lists, rendered our accumulation of audio/visual antiques redundant. Once we relocated an unused turntable, about 150 albums, stacks of DVD’s and among other things, VHS tapes holding every episode from the first Star Trek series, we had plenty of room. So having previously and involuntarily relinquished my laptop to my daughter, when I lost my job I moved in.

My cubby is actually three cupboards on top of each other, floor to ceiling, cut into 1950’s pine paneling. The computer and printer take up most of the middle cupboard, but I relocated a desk clock, calculator, stapler, and an adjustable lamp inside and manage. My feet tuck into the bottom cupboard, toasting warm next to the heat of the processor and a pink plastic storage container hosting two reams of paper. The top cupboard is out of my height range, and therefore of no interest to me.

I spend a major portion of Monday through Friday seated on a Hitchcock chair pulled up to this cozy nook. But when my husband is home on the weekends, he wants to use the computer too. Not that he isn’t a fair and equal partner but possession is nine tenths of the law as they say, and since I possess it during the week, shouldn’t the cubby be mine on weekends also? I know--not by a long shot.

To be honest and not to my credit, he doesn’t use it that often but when he’s there, I catch myself gazing at the laptop to see if it’s available in case I develop a compelling need to hop on-line. Then I worry that I have not saved the latest version of my open word document and that an errant mouse click may direct it to cyber oblivion. I busy myself elsewhere when he commandeers the corner but breathe an inaudible sigh of relief when he vacates the chair. I’m not proud of this little confession, after all I did learn to share in Kindergarten. And if that’s not enough, most time he’s there he’s finding favorite songs to replace all those old albums and I benefit from his play list too. Hence I’m struggling to get myself over it.

But there is more. Lately the cat has taken to hopping into my cubby to perch on top of printer. Sharing with Tim is one thing, my marriage vows require it--but cat hair in the keyboard? No thank you. There is no contract binding enough for that.
Posted by Liza at 4:34 PM

Email ThisBlogThis!Share to TwitterShare to FacebookShare to Pinterest
Labels: writing