I am sitting. Alone. The sun has been out for an astonishing three days. My better half is over working on the sailboat. I’ve waved my daughter off to her summer job. The plants have been watered, the tiny lettuce thinned; the laundry has yet to be put away—I’m stalling on the grocery shopping too.


Outside, wormy strings from the oak trees float down. One group of rhododendron hangs tired with blossoms that have passed.  Behind and to the side others pop with pink and purple blooms. In the garden, daylilies and iris, bee balm and sun drops wait to explode; everything is lush and green and rooted in fresh earth.

The weekend contained a prom night for the resident teen that involved a 3:00 a.m. parent pick up from an after prom party, followed by a taxing day at the cheese shop for me and then a birthday supper for the man of the house. In spite of falling asleep early last night I’m carrying fatigue like a load of cement slab. It’s enough to sit under the patio umbrella and contemplate the robin singing in the back, the ant hills growing in the patio cracks, the chipmunks scuttling under the step to the sliding door, the wind exhaling through the woods lining the yard. A hummingbird dives toward the feeder, and levitates—pausing before getting on with the task ahead.

The perennial garden out back needs a haircut. Plants we dug in years ago have grown, multiplied. We have divided and replanted so many times, the main garden, the one we created in the porous mulch residing on top of our New England ledge, spawned a second plot, and then a third—this spreading of plants evidence of how beauty cultivated creates strong roots. Now bushy cowlicks and layered tendrils await further separation.

Sometimes I look at our gardens in awe. Eighteen years ago, early in that long summer during which we waited for our daughter to arrive, our back yard was a parcel of grass-strewn briers. We kept ourselves busy pulling out the weeds, loosening the soil and installing flowering vegetation we hoped would come back again and again.

That year, we took pictures of our house, our town, the place in which our child would grow. We mounted the results in a photo album and delivered it to the adoption agency to circulate to prospective birthmothers. One of the photos we placed between those pages was of a younger me, baseball hat on to protect from the May flies, leaning on a shovel. In the picture, what is now a garden erupting beyond its boundaries, is mostly dirt. We'd  installed a few more plants by August of that year, the joyful month when our daughter finally came home.

We held her first birthday party and her fifth on the patio that sits just below the main garden, an area of cement pavers where she also took turns pedaling a plastic cart with her next door cousins. We took pictures before her first dance recital, before she left for band competitions as well as photos with her friends the day of the eighth grade dance. If we lined up all the images together, we could watch our daughter turn from a plump toddler to a leggy pre-teen to a mature young woman, while the plants behind her grow taller and thicker and spread across the space.

This week, we’ll take prom pictures; a week after that, she’ll stand in front of the garden in her cap and gown. It’s likely we’ll grab the camera again in August, her birth month—the same month she came to us and the same one in which she’ll depart for college.

She’ll be on loan to us after that, around again only for too-brief vacation stays. Otherwise, she’ll be tilling a life comprised of events for which we won’t be around to take pictures. Back home though, the garden will be there, multiplying, spreading and moving—reminding us that we’ve done a good job fertilizing and mulching and nurturing both the soil and our girl; and that it’s the right time for us to divide ourselves, so our lovely young woman can flourish in new earth. 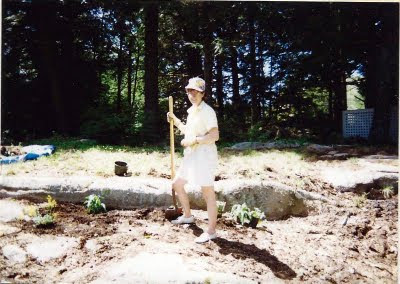 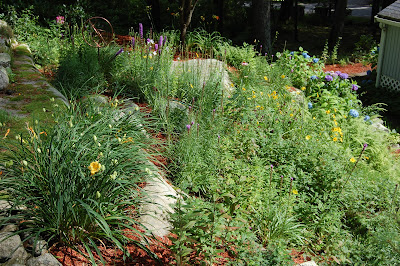 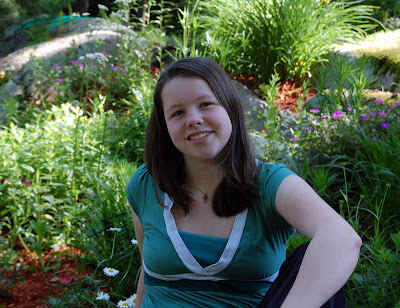 Email ThisBlogThis!Share to TwitterShare to FacebookShare to Pinterest
Labels: Garden and growing girl

The clouds remain.  When I swung by the harbor yesterday, a group of lobstermen had  parked their pickup trucks in the lot facing the water.  They stood outside in the mist, sipping coffee and watching as sea foam from the rushing tide piled around their quiet vessels—not a good day for their livelihood, but the lingering weather system provided a photo opportunity for me.

This week, I am grateful to Missing Moments, who reminded me; when it doesn't impact your living, fog is beautiful. 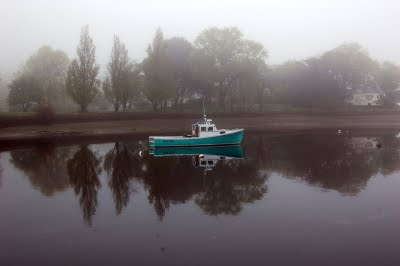 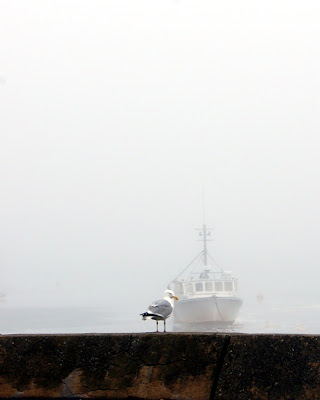 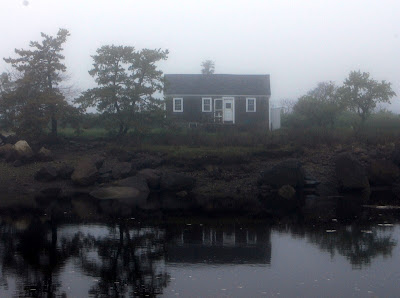 Wishing you all a wonderful weekend.﻿
Posted by Liza at 8:07 AM 8 comments:

Before it's too Late

I’ve written before (ad nauseam, you are thinking, no doubt ) about how we wait for spring here in the northeast. So when, as we roll into in what should be the height of that extraordinary but fleeting season, the TV weatherman says: “Until further notice, the forecast is rain,” we know we are in big trouble. The early rhododendrons have come and gone with barely a mention due to inclement weather. Yesterday at work, I swept up pink crab apple petals customers tracked in on their wet feet, and realized that it’s been so cold and damp that I’d failed to take time to enjoy the blossoming trees lining the downtown street. Last night, at dusk, while on an errand with my daughter in weather reminiscent of March, I noticed dogwoods flowering between the rhythmic thump of the windshield wipers.

“I’m going out with my camera tomorrow to take pictures of the dogwoods before the rain ruins the display,” I said to my daughter.

“You mean you are just going to park in front of people’s houses with your camera,” my daughter asked. “Isn’t that kind of stalker-ish?” 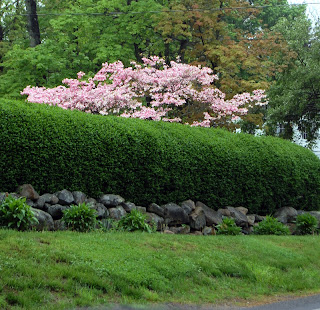 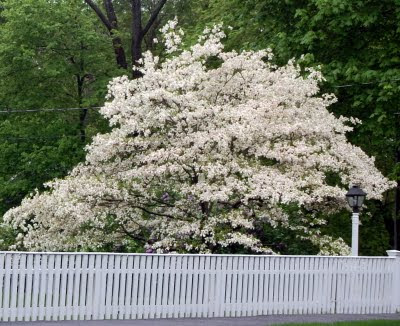 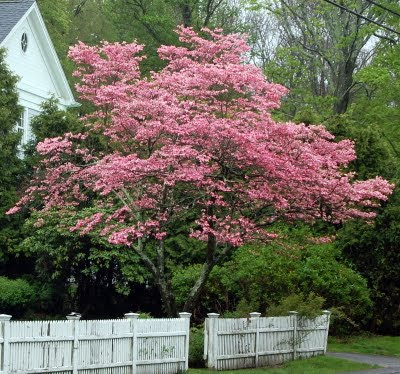 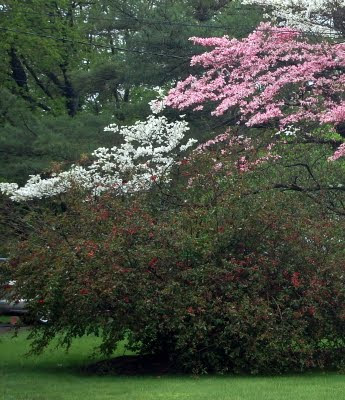 This last one is in the back of a house.  And it's mine. 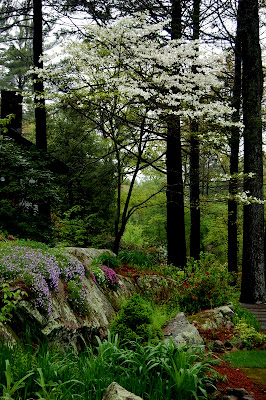 So, in the Great Blogger Outage of 2011, this post disappeared, only to return, minus comments.  Nice re-entry, wouldn't you say?  :)

During the longest break from Middle Passages I’ve taken over the past 2+ years, I learned something. The time away is more important than the guilt it produces.


Through the first year of this blog, I used a regular posting schedule as a net to hold me above the vast canyon yawning below me after my 23-year employment disappeared. By making myself accountable for writing, I forestalled, and then managed through the mountains of anxiety that threatened to avalanche me when that momentous life change occurred. Along the way, Middle Passages taught me that there is no longer a life without writing.

Year two was more about that—learning the craft, testing myself, writing in methods and styles I’d never used before. That year, I gained followers—and an audience—to whom I remain immensly grateful. Now I wasn’t only writing for myself, I was also writing for them. I also started and finished a first novel, a disaster that will never see the light of day—but I proved to myself that I could get through the writing of it, plus a dedicated first revision.

Late that summer, I took a part-time job in a food/cheese shop because the writing wasn’t paying—and here’s where we get to the point where you just never know. I shared a humorous piece about Brussels sprouts relating to my employment with my bosses. Not long after that, the shop was featured in a local lifestyle magazine, South Shore Living. The editor showed up to refine some details one day.  I happened to be working, and the chef/owner boss dragged me over and introduced me as a budding food writer, referencing that post. It was an outstanding networking opportunity; I intended to follow up to pitch a story or two. But before I could, the editor called and asked if I’d consider writing bi-weekly food related blog posts for the magazine. There was, ahem, no budget to pay blog writers, but perhaps sometime, there might be a paying article. I agreed, looking at it as another way to market my writing skills, with hope that it might lead to paying writing work.

Suddenly, I was spending weeks at a time writing meticulous blog posts for the online magazine that might have a life beyond my own personal blog. At the same time, I was also trying to muster my way through novel #2—and Middle Passages kept pulling at me.

I love Middle Passages. Honestly, this blog brought me to life and saved me when the cement bag of angst I carried might have led me to drown. But it’s time for me to understand that this a vehicle—a means to achieve other victories.  For a while there though, it tried to pull me away from the game. I needed, no wanted, to focus on the South Shore Living blog posts and other writing, but kept veering toward posts for Middle Passages instead—

Then South Shore Living Magazine offered me an unsolicited, paying article under a tight deadline which required conducting several interviews, and not only was I in the game, I was pitching. Clearly, it was time to take a blog break.

The article, which by the way, was a blast to write, is now in. And I refused to write this post or look at other blogs before I completed 1000+ words on the newest novel attempt this morning. So, yes, I am back. For now. Knowing that Middle Passages is here to help me progress step-by-step. And that sometimes, it will have to wait patiently for me, during the times I need to leave it behind.

What priorities have pulled you away from your blog lately?
Posted by Liza at 9:28 AM 17 comments:

I'm taking a break for a  bit. I've allowed myself to get distracted by reading or writing, a blog post too often over the last few weeks.  I'll be back soon, but I need to hold myself accountable for a while.  In the meantime, perhaps someone can help me with a Blogger issue?  We recently purchased a new computer.  When I enter a post on Blogger and try to review in the preview pane,  it comes up briefly, then disappears.  All that remains is the banner that says "Preview" slicing across a big white screen.   I know it is likely an issue with a security setting, but don't know how to fix it.  Has anyone experienced this? Until yesterday, I didn't worry about it, because I entered my posts on the laptop, but yesterday my poor little laptop died.  Sigh.
I'll leave you with these.  My husband and I took a ride yesterday.  It was blustery and cold, but worth every shiver.
"See" you soon. 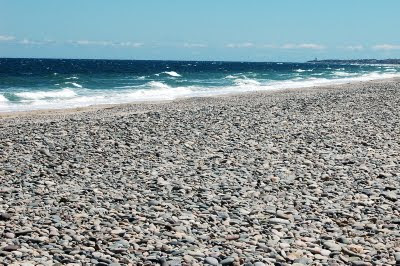 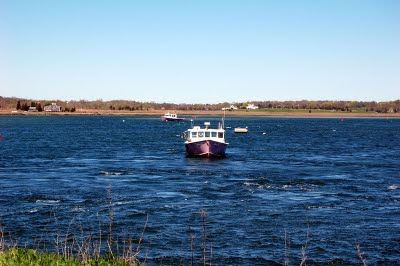 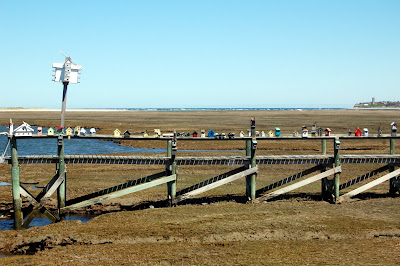