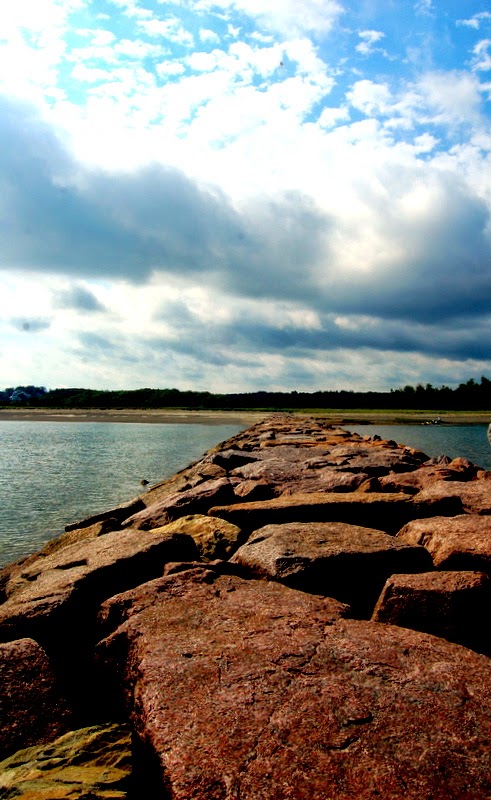 Sunday I woke early to a rising sun, turned to my husband and proposed a morning trip in the dinghy out to the harbor jetty.  “Church first,” he said, so I settled in for a few more minutes. When I opened my eyes again, the sky in the west hung low and white, the kind of ceiling that tells you there could be fog over the water.  We scrambled up anyway and drove to church, were I sat through the sermon with my fingers crossed.  It seemed frivolous to pray about the weather, so I simply hoped, grinning once we exited the building to find the sun had powered through.  As is our tradition, we procured the requisite bagels and coffee, and, arriving at the harbor to a freshening breeze, convinced ourselves there would be time for our  trip before the weather changed.  My husband navigated while I balanced two cups of coffee, so facing the stern, I observed full-bodied cumulonimbus clouds mounted on top of each other in the northwest sky.  From the southwest, a blanket of heather-gray inched forward, blocking what was left of the sun.  Between, a thin strip of blue seemed to negotiate.

In spite of the threat, we anchored the boat and step-hopped to the tip of the jetty, where we took a seat,  unwrapped our bagels from their butcher paper packages, and commenced our breakfast.  In front of us, eight white sails ran before the wind in an attempt to beat the weather for an early Sunday race.  Before long we heard the bleat of an air horn and far in the distance toy sails scurried across the mouth of the harbor.  Campers from the barrier beach behind us chatted as they paddled around the jetty back to shore, their overloaded canoes leaning with sleeping bags and folded tents.  A lone lobster boat chuffed through the water on its way to pull traps, a life-jacketed kayaker bobbing on his wake.  Seabirds, ever present background music, carked and screed, peeped and called in concert with  the clanking of halyards from nearby sailboats.

Often on these trips, after we swig the dregs of our coffee, we walk on the mud flats or hike on the beach, but this time, as we crumpled up our bagel wrappers, goose bumps forecast what was to come. So, we picked our way back over the granite boulders to our little boat, knowing this day would not be for gardening, blueberry picking or sailing, and sure enough before we'd tied up the boat, raindrops spattered our glasses.


It didn’t matter though.

Our visit to the harbor was long enough to give thanks for the day, the summer, the sound of the sea, and the sky. 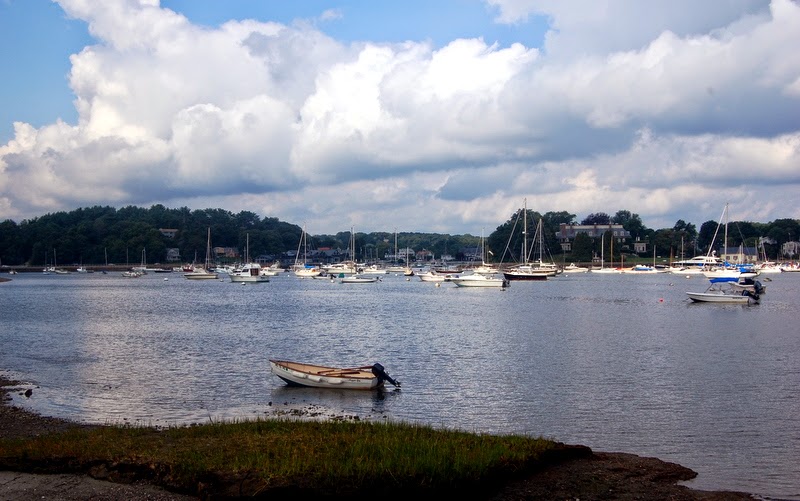 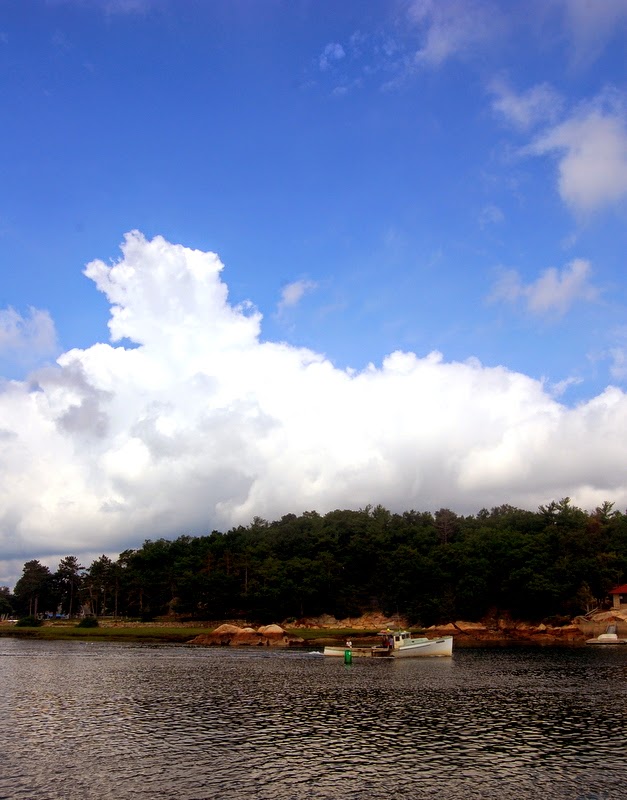 Email ThisBlogThis!Share to TwitterShare to FacebookShare to Pinterest
Labels: 2014, Church of the Jetty


It’s funny how traditions get made.  My next-door-neighbor-sister-in-law and I used to bring our kids blueberry picking, mostly for the distraction.  The farm was ten minutes away, the kids would run around the high bushes, pick a few, spill their cans, eat a few more and the adventure would be over.  At home, I’d get the handful of berries we salvaged, and the responsibility of making something out of them to share, most times an Amish Blueberry Cake.*  That would be it for the season.

As our kids got older, they decided procuring the fruit was more work than adventure, and about that time, blueberry picking morphed into my thing.  In late summer, I’d drive past the farm scanning for the handmade sign at the bottom a dirt road, telling me the fields were ripe.  When it appeared, off I’d go.  Over the next fifteen or so years, things didn't change much other than I’m on an email list now, and I don’t even have to drive to the farm to know when the crop is ripe. This year, the berries came early.
Saturday, I arrived early in the morning and for the first half hour, it was me, the bushes and the birds.  They squawked as I approached too near their perches, feathers rustled as they lit off over my head.  A hawk scree-screed in the high pines overlooking the bushes.  A single propeller plane lumbered overhead and  across the cranberry bogs, someone tried to start a chain saw, but it coughed out, leaving me and the birds again.   I moved from bush to bush, reaching up, pulling down berry-laden branches, and dropping the little orbs, thunk, thunk, thunk into the plastic container hanging around my neck. The whole thing is on the honor system.  Pick as many as you want, put them in quart containers and place your cash in a box on the wall of a dilapidated shed at the edge of the fields.  In less than two hours, I had serenity, five quarts of blueberries and a plan.
In all the best ways, everything is “farm to table” these days, and Saturday it was my turn.  I called next door, then to my husband’s mother a mile away, invited everyone to a blueberry-themed dinner, and started cooking.  Over the next few hours, I buzzed around the kitchen making a syrup for blueberry cordials, a blueberry spread to go with cheese, a spicy compote to accompany grilled pork, a wheat berry salad with fresh blueberries, blueberry vinaigrette with which to toss mixed greens, and, of course, blueberry pie.

Every once in a while, you have one of those days when everything comes together, a day you will hold in your mind and savor, well, like a ripe fruit.  I’m not sure what was best, the picking, the cooking, or simply sitting around my kitchen table with people I love, enjoying, ahem, the fruits of my labors.

Then again, maybe it was the leftover blueberry pie I had Sunday morning for breakfast.

Cream the butter, then add the sugar a little at a time and cream it again.  Add the eggs and some of the flour, sifted with the salt and baking powder.  Blend this slowly, adding the milk and then the rest of the flour.  Wash the berries, dry them on a towel, and then dust them with some flour.  Add them to the batter just before baking.  Pour the batter into a greased and floured 9x13 inch pan.  Sprinkle the batter with the cinnamon sugar spice mix.  Bake at 325 for 45 minutes.

The Sound of Silence

We went away for more than an overnight for the first time in five years.  Away, away.  With my husband's brother and his wife.  Into the woods, by a lake, twenty-five minutes to the nearest town, many, many minutes from anywhere else.  No TV.  Spotty Internet.  Cell service touchy.  We slept in a cabin, searched out moose and found four, climbed to a ninety-foot waterfall an hour’s hike deep into the forest.  We kayaked for a couple of miles and returned with the wind dead in our faces. We tooled around in a tin motor boat.  We watched a mother duck go after a mink that was threatening one of her babies.  We chased away a red-tailed squirrel that hopped through a hole in the porch door and charged the table where we’d been eating peanuts. We drove twelve miles up a twisting incline, got out to eyes tearing in the wind, to see a 360 degree view.  Mountains.  Lakes.  More trees then we’ve seen in our lifetime. The skeletons of twisted  trees.  Cairns stacked three stones high. Anything higher would blow over.

A week of quiet.  A week of still.

Crackers and cheese with wine out of plastic cups, on a dock overlooking the lake.  Sticky finger S’mores in front of the camp fire. Weather too cool for the katydid’s we’d hear at home.  Even the birds spoke in whispers.

Awake by an open window in the middle of the night, I listened to the cry of the loons, convinced the mournful call was nature’s way of feeding our hearts. I got up at five and walked through the dew to catch the sunrise on two mornings so cool, mist rose from the lake.

A week to last a lifetime.

Home now, we just have to hold on to it. 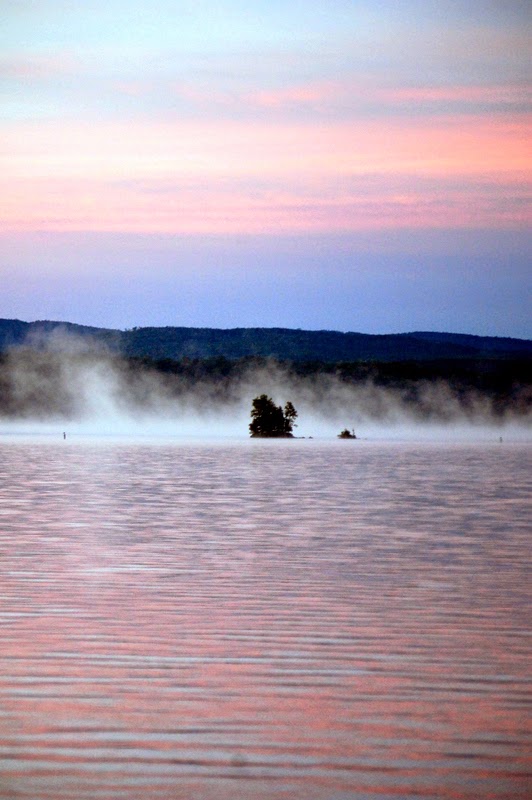 Email ThisBlogThis!Share to TwitterShare to FacebookShare to Pinterest
Labels: Rangely 2014 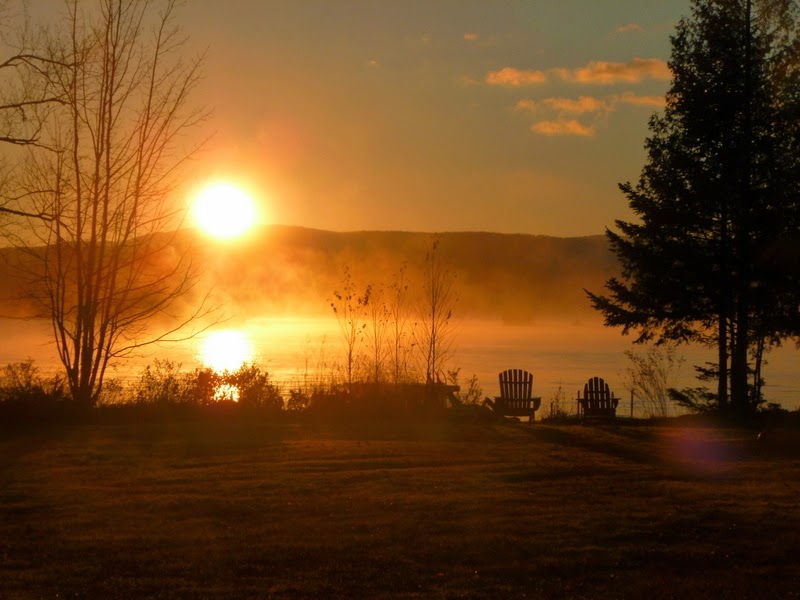 It's time recharge the old brain juices.  I'll be back mid-July.  Best to you all.

This is my IWSG post for July.  IWSG is Alex Cavanaugh's brainchild where writers help and support other writers.  To read more posts, click here.

When blogger had its hiccup recently and blog rolls failed to populate, I had a bit of a come to Jesus moment.
For over five years, I’ve ranged from diligent, to consistent in my posts, but what has never changed is how much I have treasured every comment received here at Middle Passages.  It is news to no one that our craft can be a lonely one, and the virtual world makes it less so. Each comment means someone is reading…ME.   Last week, Blogger blew up our reading pages and I had to click one-by-one through my blog roll to read the bloggers I follow.  Pretty quickly, I realized as hard as it was for me, it would be just as difficult for my followers to find me.  If this thing didn't get fixed fast, well, gosh.  Maybe they’d stop coming.  The thought made me feel a little sick. Bereft, even.

And so, the aha.  I realized, as much as I love it, I don’t just write for myself.  I want, and crave readers. During Blogger’s issue, I investigated Feedly and other options, and would probably have ended up subscribing there.  But would other folks have done that?  Would it have been important to them to find me?  The idea made me harken back to those pre-Internet days.  What if the only way for folks read my stuff was to keep submitting it to a traditional, competitive publishing world, knowing that most of it would have returned to me with a great, big R for rejection (if even that).

That’s when I knew, I’d fail without a writing community.  To all of you out there, I want you to know how important you are to me.
Posted by Liza at 6:00 AM 19 comments: