To me, Memorial Day is May 30th, not the last Monday of the month that we celebrate now, even though for the majority of my life, the Monday holiday has been the norm.

Growing up in my house, May 30th had a special significance because, in addition to a day to honor our war heroes, it is also my sister’s birthday and, with a timing that our father convinced us occurred in honor of that momentous occasion, the Memorial Day parade marched right by our house.

As kids, we would jump off the front steps; practice our cartwheels and somersaults; and then run to the street when the pounding of drums announced the parade’s imminent arrival. It wasn’t much in the way of display, a band or two, the measured pace of flag-holding veterans, baton twirlers and uniformed scout troops, a group of bike riding kids and flowing streamers riding beside. However understated though, at age five or age ten, the event was as big as the world to us. That parade and its route by our house ceased somewhere around the time the Memorial Day date changed; the only thing left is a tale we tell as a part of family lore, of the birthday girl covered in poison ivy the day one of those parades marched by.

I thought of this all yesterday when my husband and I wandered downtown to cheer our daughter as she marched with the high school band during our town Memorial Day celebration. The common was decorated with families dressed in shorts and red and blue, luxuriating in one of the few warm days we’ve had this spring. Kids biked around the pond at the middle; over by the Unitarian Church, the Daughters of the American Revolution stood in the flowing dresses of their period garb. In front of the white painted colonial housing the Senior Center, volunteers did a brisk business in hot dogs and popcorn, and everywhere it seemed, American flags rippled in the sea breeze. We found my husband’s mother and dad, his sister and her two sons sitting under the umbrella of a shady maple. The boys, ages four and two, munched on steamed hot dogs and reached hands into paper bags of popcorn. Jiggling in anticipation of the parade, they jumped up to dash about the yard in giggling bursts of excess energy.

I waited in a different kind of anticipation--a blossom of gratitude expanding in my chest for those who serve, for the respect our town displays, and for my daughter who has played the flute since the fourth grade and would demonstrate her own patriotism this day. When the sound of music drifted to us, we ran to the street, the boys waving their tiny American flags. Aging veterans and civic leaders drove by in shiny convertibles, younger veterans marched behind. “The Rusty Skippers,” the town band consisting of local volunteers reprising their high school playing skills marched by, and we whooped and hollered as our daughter and her classmates followed.

As a contingent of retired marine musicians marched behind the predictable scout troops and bicycles, I looked at our little nephews, tired now, but holding their flags and still waving. For a moment I was once again their height, delighted by the bands, clapping at the soldiers, and regardless of the date, experiencing that first dawning loyalty to our country in a way that lives forever.


Since my writing infancy, I’ve penned poems, though as a rule, I don’t “get” poetry.  Oh, I understand my own, of course, and other free verse examples.  But in high school and college English, I struggled when we had to analyze poetry.  It took me forever understand meanings, and if you consider poetry styles, I’m clueless.  Couplets?  Sonnets? Sextets? Iambic Pentameter? Huh? I remember during junior year of college, digging into Walt Whitman’s When Lilacs last in the Dooryard Bloomed which (I think) was an elegy, written after Abraham Lincoln was assassinated, and struggling to get through it. I had a good professor, Dr. Reiss, and he got me where I needed to be,  but the whole exercise felt like peeling bark from a tree with my fingernails.

Still, I write poetry even now, and I wrote a poem last summer and posted it to this blog, while undergoing what felt like a seismic shift when our only daughter was about to turn twenty.  Recently, Robin, of Your Daily Dose honored me by reprising it on her blog.

Robin is one of the most generous blogging souls as it pertains to supporting other bloggers, and I was tickled when she featured me.  But I was surprised, too, that with all the essays I’ve written over the last five years, Robin chose to represent me via a poem I wrote during the weeks when it seemed our daughter’s childhood was peeling away.   When I found my poem on her blog, I had this golly-gosh realization.  Oh right. That’s me.  Sometimes, I write poetry.

Robin’s call-out made me realize something.  The thing about poetry is that every word needs to be honed down to its absolute, essential meaning. Writing poems allows me to strip back words until I get to a nugget—a place where I can stare down the spare language of feeling, and digest it.

There are times in life emotion is so great, it's hard to express it.  That's what poetry is for.
A big thank you to Robin for reminding me.

Email ThisBlogThis!Share to TwitterShare to FacebookShare to Pinterest
Labels: poems and emotion, Robin Your Daily Dose


The thing about growing older is that you become…experienced.  You know that a certain breeze will bring a storm because it always does, and that when the clouds layer in the sky like fish scales, it will rain the next day.  You know the old adage, “... red sun in the morning, sailors take warning" is true, and when you wake up to a crimson dawn, you plan around it.  You step outdoors on a winter day and inhale the just-from-the-washing-machine-damp smell, and anticipate the snow that's on the way.

And at our house, we know when a cloudy sky is back-lit from a clearing west and it begins to rain, the situation is ripe for a rainbow.  In this case, we know it by gut, but not by sight, because the neighbors’ trees block the eastern sky where a rainbow would appear.   I used to climb into the car with the camera when those conditions occurred, determined to get to a clear spot where I could capture what I knew was there.  Most times, I arrived too late, the last snippet of a rainbow, fading before me.


A few days ago, my husband and I were home on a cloudy afternoon.  The sun broke through just as rain started to fall and I thought about hightailing it to the beach for a photo op.  But experience advised me I’d never get there in time, so I shrugged, and joked.  “We have to tell (neighbor) to cut her trees down, because I know there's a rainbow up there, but we can’t see it.”  I forgot something though.  This year, spring is late.  The trees are just leafing out now and that day, they were bare. A few minutes after my fuss, my husband stepped outside.  “Hey, Lize?  You might want to come out here.”

Let's call it an obstructed view.  But at least there was one. 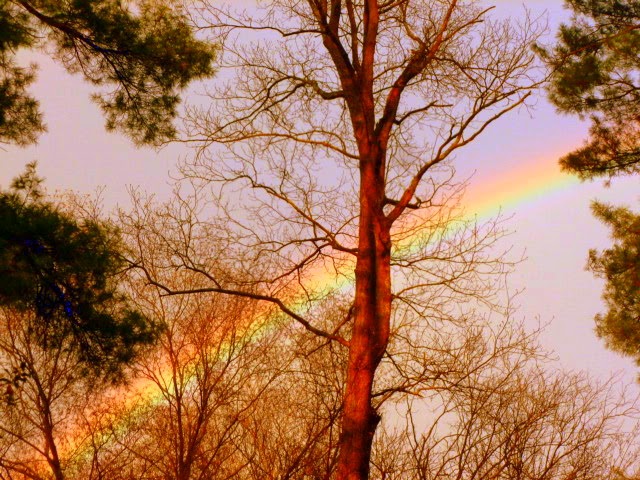 Email ThisBlogThis!Share to TwitterShare to FacebookShare to Pinterest
Labels: Rainbow across the street, the voice of experience
Newer Posts Older Posts Home
Subscribe to: Posts (Atom)