Always in December, I rediscover the whimsy of colored lights blooming on the tiny pines in our backyard, the majesty of the staid white lights adorning the spotlighted bushes in front.  This year, I dragged my husband not once, but twice through a neighborhood of McMansions a few miles away, whose owners compete, embellishing their yards with glittering swarms of lights— blinking bangles of bracelets and necklaces, entire collections wrapped around every branch of every tree.  It's the season of decoration.  I love the white crocheted angels we tucked away for safety seven years ago when the kitty arrived and rediscovered this year—and the antique music box unpacked from its nest of tissue and placed at the center of the table.
The Christmas season delivers such a sense of wonder that a pit of loss expands in my gut when I think of packing up the nutcrackers gracing our mantel, of pulling the bows off  the drooping Christmas tree before tossing it out the back door, of driving up to a house lit by a single lamp post.
But yesterday provided a reminder...
Though a high pressure system painted the sky blue, the wind howled through the trees, brooming the bare lawn with a litter of pine branches.  When you live by the shore, wind brings a show.  So yanking on hats and scarves and pulling out two cameras, my husband and I drove down to the harbor and tiptoed up a private drive to the porch of a stone and brick boathouse. 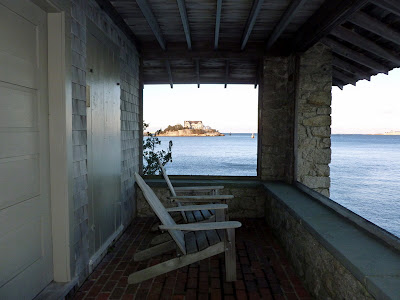 There we watched seagulls chase a late afternoon lobster boat to his mooring, while waiting for a setting sun to reflect pink on the clouds in the eastern sky.  Sheltered from the chillling gusts, we hoped to capture an extraordinary moment on an ordinary winter day. 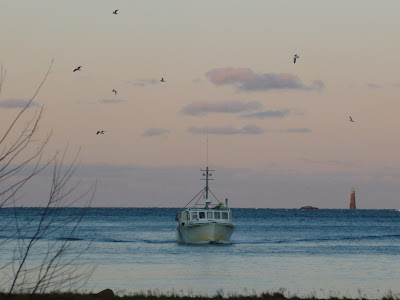 In the end though, an off-shore breeze limited the ocean’s drama, and the wind drove the clouds away.  Disappointed, we turned back toward the car and discovered a subtle show taking place behind us—the backlit legs of the boarded-up yacht club, peeling aqua paint flaking from an abandoned wooden dinghy. 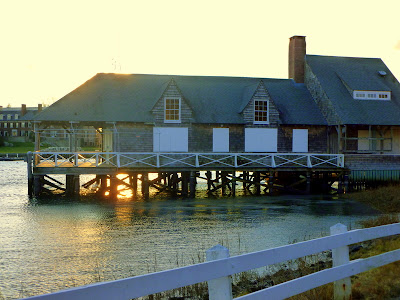 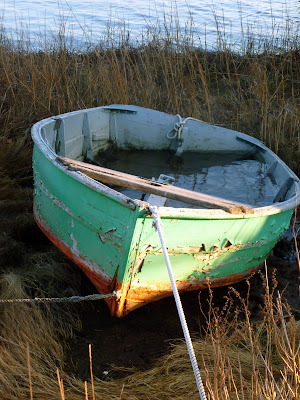 Clicking away, we recalled the blessings these quiet adornments offer year round—a silent beauty always available—one that never has the need to compete. 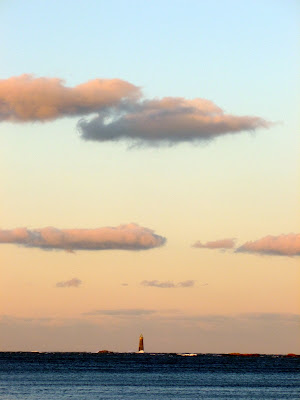 Wishing you all a New Year filled with beauty.
Posted by Liza at 6:00 AM 20 comments:

Merry Christmas to All 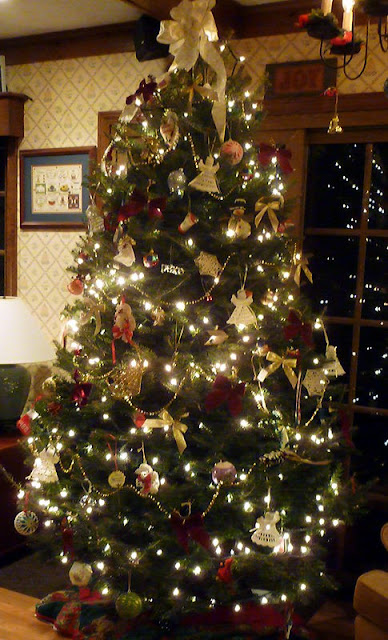 Wishing you Peace, Joy and Prosperity.
All the best,
Liza
Posted by Liza at 1:22 PM 10 comments:

Email ThisBlogThis!Share to TwitterShare to FacebookShare to Pinterest
Labels: Christmas 2011

DL Hammons had this great idea, and, together with Creepy Query Girl, Nicole Ducleroir, and Lydia Kang, is sponsoring the Deja Vu Blogfest.  The guidelines require re-running a favorite blogs post so it gets some more "air time." You'll find one of my favorites below:

Check out the other participants and have a great weekend!

A Hunger for Words

Saturday my husband, daughter and I drove to Rhode Island on a preliminary college reconnaissance mission. After strolling through curving asphalt paths past the red-brick buildings at University #2, we took a detour through Providence, up through Federal Hill to a specialty Italian Food Emporium that I visited seven years ago, but have not been to since.

We had no plan to purchase, only to wander around the large central glass case where soft lights shined on home-made Italian delicacies, layered lasagnas, breaded eggplants, stuffed green artichokes, bracciole and hard sticks of imported pepperoni. My mouth salivated at the bins of briny olives, wedges of salty Parmigiano Reggiano, meaty slabs of prosciutto, expensive green olive oils, and balsamic vinegars that pour like syrup. We inhaled the scent of garlic and stared at the side wall-freezers stacked with frozen flavored raviolis—butternut squash, lobster, mushroom and cheese.

Around us, clerks spoke in Italian accented English, and in the corners, white haired men sat at marble tables, black button-up shirts opened at the neck as they sipped red wine and a yellow drink I took for Limoncello. Any temptation we had to open our wallet faded at the line of customers stacked two deep in front of a smiling cashier. We left, after savoring the complimentary pizzelle slathered with Nutella a cheerful clerk offered us, wishing for five more circuits through the store, a bottomless purse, and a walk-in freezer back home in which to store the delicacies. Can you believe that we only went to look?

Of course I longed to buy things at the store in Providence, but rationalized not doing so by labeling it a big-picture visit. We would have relished the Nicoise olives I wanted to buy, the quarter pound of textured cheese I imagined ordering, the anticipation of dinner as we plunged lobster ravioli into boiling salted water—we would have savored it all—but then—it would have been gone—a short term extravagance, swallowed and then forgotten.

Instead I left empty-handed but dreaming about the store offerings, which I subsequently cataloged to use at my own discretion. Now that the images and smells from Saturday reside in my memory, I can pull them out when I want to serve them in a story, as an appetizer or a dinner, arranged on a bright blue terracotta platter beside a stem of plump red grapes and a sweating bottle of chilled white wine. I can slice hard sausage and place it in layers on a decorative plate along with ripe tomatoes and dripping mozzarella, dribbling the whole thing with aged balsamic. I can serve steaming artichoke hearts and lemon aioli beside plump stuffed mushrooms, using an ornate silver spoon—or slather garlic infused white bean puree onto toasted ciabatta bread, sprinkling the tops with chopped green parsley.

I can eat until my stomach protests, or graze, an olive here, a sliver of cheese there, a dip of bread into a simmering pink vodka sauce. The feast can arrive at midnight, or three in the morning or for breakfast, and I can offer it to friends or eat it all by myself, licking my fingers one by one when finished. In brief, I can dish up whatever I want, when I want, with whom I want, and however I choose to design the layout of the luxurious repast, well, it all came to me for free.
Posted by Liza at 6:00 AM 26 comments:

Email ThisBlogThis!Share to TwitterShare to FacebookShare to Pinterest
Labels: Deja Vu Blogfest: A Hunger for Words

I have been writing.  Just not...here.  To read the most recent hunger-inspiring essay on South Shore Living, click here.  How bad is this?  I forgot to check and see if it was posted...and it was...two weeks ago.

Other than that it's been a goal of 1,000 words a day on the old WIP.  If you add the limited time I've spent writing on weekends to the weekday mornings I exceed my goal, perhaps, like the title in the piece above, I might be measuring up too.
Posted by Liza at 6:00 AM 8 comments:

As I walked toward the town Christmas Festival this weekend, an event I’ve attended with my daughter for the last 10+ years, a fire truck drove by, its siren blaring and horn honking.  Santa rode shot gun in the passenger seat on his way to our town common.  There he disembarked, waving a white-gloved hand to the line of toddlers staring in awe.  I paused; a lump of memory squeezing my throat, as he crouched in front of a tiny boy, then crossed the frozen grass to mount his red sleigh.
Over all her Santa-believing Christmases, we never took our daughter to the mall to meet St. Nick, preferring this open air, non-commercial event instead.  Each year, surrounded by the white-steepled churches and antique homes, she’d clamber up to sit beside Mr. Claus and have her picture snapped.  Not for us the crush of crowded shopping centers, holding coats and hands of sweaty children for eternal minutes, while standing in long, snaking lines.  We may have stamped cold feet, but we never waited long.  After the photo-opp, we’d wander through the festival venues, before retreating to the Second Parish Church where we’d pick up the Polaroid picture of our girl sitting beside Santa, elves had fashioned into an tinsel-covered ornament.
When her Santa years ended, she and I continued to attend the Festival together, stopping first at the Episcopal Church for their used book sale, before trotting down to the congregational church for bowls of homemade clam chowder.  At a table in the back room, we’d crumble our crackers into the thickened soup and slurp its salty goodness.
This year, after purchasing five books, I headed down for chowder, but with my festival partner off at college, I didn’t have the heart to eat there alone. I purchased a pint to go, crossed the common to the community center where the Greek Orthodox Church was selling Baklava, spending my last $3.00 on a piece to share with my non-chowder-eating-husband.  Then I headed home.  In all, it was a lovely day, except for the undercurrent of missing my regular companion.
Here is where karma pops in.  Our daughter’s name is not uncommon, though its spelling is.  Living with my own misspelled and mispronounced appellation, I should have suggested we think a little harder before we named her, but that’s hindsight.  As a result, she too has experienced a lifetime of misspellings.  She, her dad and I lift our eyebrows on the rare occasions we encounter someone who spells it the same.
So Saturday, after I arrived home, still thinking about her, I dug a spoon into my cooling broth and perused one of the books I’d purchased at the book sale.  Two sentences into it, the main character’s name jumped out at me—my daughter’s name, spelled correctly.  Imagine that.  There I was strolling around alone at that festival, and she was with me all along.
No doubt I'm going to like that book.
Posted by Liza at 6:00 AM 22 comments: