This year, Thanksgiving comes to my family amid changes.  Faces that should be at the table won’t be.  Less family, fewer chairs, smaller turkeys.  Who knew, when my husband and I volunteered to take the holiday off his mother’s shoulders almost twenty years ago, we’d claim ownership to a guest list that would often exceed thirty?  Somehow we managed to seat them all.  It warms me that our twenty-five year old niece calls Thanksgiving at our house her favorite holiday.

Of course I expected at some point things would change. Kids grow up, schedules conflict, people move.  But expecting isn’t the same as experiencing. Folks seem to enjoy Thanksgiving in our little world.  Tables that stretch from the dining room to the far end of the living room.  A bar we are forced to set up in the garage.  I crossed my fingers that we’d keep our tradition going a little longer.
I wish I knew last Thanksgiving, that 2013 would be the one that would be different. That illness would wrap its fingers around one.  That geography would claim several more.  I would have taken a moment to pause during last year’s flurry of gravy making and potato mashing to mark the moment.  All that family surrounding us.  Had I been conscious of the pending adjustment, I would have made a point to sear the joy of that day deep into my mind.  Or better yet, my heart.

We’re still hosting the holiday. There will be nineteen at the table.  But as I roll out pie crusts, I’ll be conscious of those not with us.  Those flying in inclement weather.  Driving on icy roads.  I’ll say a prayer.  I’ll baste the turkey.  I’ll be delighted our daughter doesn’t have to work.  I’ll give my husband a hug.  Most of all, I’ll give a good long look at the family present and acknowledge what we still have.  Then I’ll offer up gratitude for last year, and all the Thankgivings that have gone on before.

Wishing you all a joyful holiday, surrounded by those you love.

Email ThisBlogThis!Share to TwitterShare to FacebookShare to Pinterest
Labels: Thanksgiving 2013

The Road I'm on


Robin of Your Daily Dose reminded here recently, that my blog posts have dwindled in quantity.  I’ve struggled with the emotion surrounding that truth and guilt hovers. This is not my swan song.  Maybe it's an apology of sorts, although it feels funny to apologize for traveling a path I want to follow. How about this.  Let's call it an explanation.

I found myself as a writer through Middle Passages.  People who know me will tell you on the outside, I handled the trauma of wrenching unemployment well.  Writing here helped me make peace with the feeling that I’d spent twenty-three years doing the wrong thing only to get tossed aside over the course of one afternoon.  In one hour—out the next.  But inside, I was a jellyfish of “Holy crap” and “What do I do now?”  There is no way I would have managed through it hadn’t spent every morning writing my brains out.
In the midst of that cluster…transition, blogging saved me.  Back then, Middle Passages was my writing.  Oh how I loved hitting “publish” and seeing my words up there, for anyone to read.  Later, blogging led me to other bloggers, who, in turn, led me to toy with fiction.  I wrote flash fiction.  Then I took a what-the-heck whack at a first novel.  Later, it led to freelance writing projects and one of those projects led to the position I currently hold.  And after almost five years of writing nearly every day, I know one truth.  While a job helps provide for my family, writing saves my life.

When I started Middle Passages, I announced my goal to learn to “use words to their maximum potential.”  I’d rephrase that now. The goal is to reach my maximum potential as a writer.  These days, I write a newsletter for work, provide updates for the local newspaper, catch a freelance magazine article now and again.  And I write for my Grub Street class where I focus on a third novel hoping maybe this one will crack it.  That this will be the one.
With all that, I’m sorry to say, I struggle to find good subject matter for Middle Passages.  I hold myself to a high standard.  I want my posts to hold depth and meaning. I may take up space with photographs, but make no mistake.  This blog has always been about serious writing for me.

So, if you don't see new posts here, please assume I am off somewhere, seriously writing.


I’m writing this for those of you with aging friends and relatives.  Last week my daughter and I were visiting an 80-year-old friend.  While we were there, she took a phone call and it was clear the person on the other end demanded something.  Every time Friend tried to get off the phone, the caller continued to engage her and, across the table from us, Friend became flustered.  I knew something was wrong, and finally convinced Friend to hang up.  As soon as she did the phone rang again, and this time, I picked it up.  A woman insisted she needed to speak to Friend and when I told her Friend was no longer available, she announced, “I know she is there, I was just speaking with her.”

The caller identified herself as a representative of American Reader (which according to the police is a legitimate publication company, although clearly, this person was NOT employed by them).  The woman asserted Friend had ordered something and she was trying to cancel the order.  She stated she had the last four digits of friend’s credit card, but she needed Friend to verify the whole number before she could put the cancellation through.  When I told her there was no way she was going to get Friend’s credit card number, the woman, rude as they come to begin with, became belligerent and I hung up.  Immediately, the same number called again and I cut off the call without speaking.  This happened seven or eight more times.  Finally, I picked up the phone when it rang and said, “If you call this number again, I’m calling the police.”  She called again, and I called the police.
The lovely police officer who came to visit indicated that this scam has been prevalent in our area lately. He reminded Friend of something that seems like a no-brainer, but that I am suggesting everyone who reads this might share with those with those who may be vulnerable.

Giving the overbearing tactics, I’m sure the perpetrators’ theory is, “if we beat them down, they’ll give us what they want, just to make us go away.”

Folks, outside of my writing time, I work for a senior center.  The generation before us was trained to be polite, to listen to authority. Our friend tried to be nice.  “I don’t remember ordering anything,” she said.  “I’m not sure where my credit card is right now.”  Every well-mannered sentence she uttered opened a door for the scammer to push further and I am not convinced, had we not been there, Friend wouldn't have given the woman what she wanted just to make her go away.

Check with your parents, grandparents and elderly friends.  Remind them they are in charge, regardless of how abusive someone is on the other side of the telephone line. Share no personal information over the phone.

Email ThisBlogThis!Share to TwitterShare to FacebookShare to Pinterest
Labels: Phone Scam for seniors 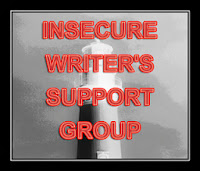 
Only two weeks until my Grub Street workshop ends and I’m pondering how I'll feel the first Monday I don’t have class.  I’ve learned so much via these two courses, the most important of which is without ongoing, objective feedback, I slip into ugly habits.  I deluded myself, thinking if I read, read, read about the craft, I’d figure things out.  But now I know reading must be combined with regular, unbiased criticism.  Don’t get me wrong.  I've had critique partners, and before these workshops, I believed I acted upon their feedback relating to my shortcomings.  But when challenged to read five pages of my work in front of classmates as well as a direct and astute teacher/novelist, criticism takes on a more tangible quality.

Still, most times I leave class inspired.  Energized.  Thinking, I get it.  I can’t wait to try to work the suggestions into my story.  Did you notice the modifier?  Try?

It is so hard to do it right.

I bumped into a woman from my former writing group the other day.  She asked how the Grub Street workshop was going and I answered something like, “Ninety-five percent of the time, I leave class amazed at what I’ve learned.  Five percent of the time I leave thinking, God, I‘ll never to be able to do this.”

But after each session I drive home with this renewed commitment to sit down and edit the life into what I’m writing. To ratchet up the conflict. To pare down my description to one stellar phrase.  To consider pacing.  To make the dialogue more realistic.  To stop stage-directing my characters all over the story, to use all of my senses, and to place back story in increments, only where it belongs.

I navigate the two-lane highway toward my house contemplating this:

It's an IWSG week, so I'm keeping this one short and sweet.  See you Wednesday.

We went pumpkin picking the day before Halloween, tipping our hats to a holiday in which we are now quiet by-standers.  The few kids who used to trick-or-treat on our busy street have grown up, and we didn’t expect visitors.  Still, our daughter, who makes good use of her hands, decided it would be fun to carve a pumpkin. The grocery stores had already dispensed with  Halloween decorations in order to make room for, gulp, Christmas, so we headed across town to a fund raising pumpkin patch  which was still doing a brisk business.

On the way out of the grass parking lot, home was to our left across a long line of traffic, so driving daughter took a right.  “We’ll take the scenic route,” she said, which meant a five mile detour past the ocean.  Oh, I have trained her well.  She may have regretted her decision though, because her mother had a camera, the air was thick with moisture and the sea still.  But she’s used to me, going so far as to suggest visiting a place where the photos could be optimum.  Even she agreed there's a lot to be said for a lighthouse that appears out of the mist, as if floating on air... 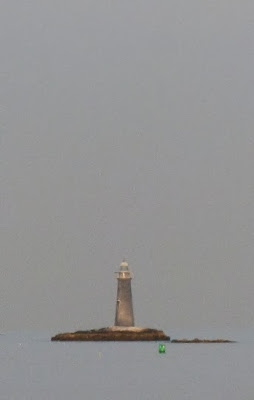 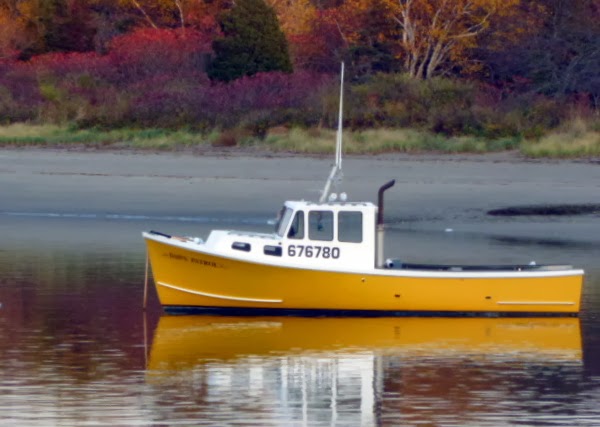 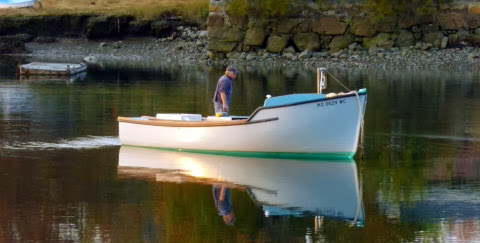 And a short-sleeved fisherman reflected on the water. 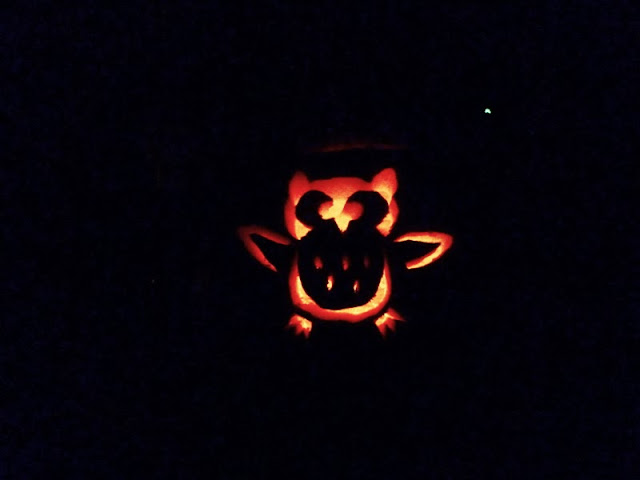 We didn't have a single trick-or-treater, but pumpkin came out well, don't you think?