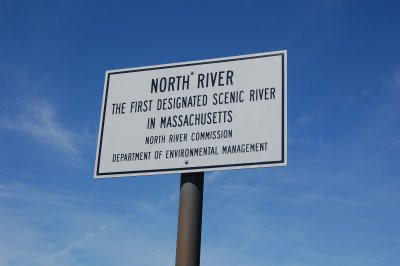 Ah, where to begin? With the doe and two fawns at the bottom of the rolling lawn of the yellow antique colonial, nibbling brush by the side of the river, who looked up at the sound of our motor and then trotted behind a mushrooming maple? Or maybe I should write about the freckled girl and two skinny boys, squealing as they ran through the green marsh grass over our heads before catapulting into the brown water below? How about the orange vested construction worker who stopped his drilling at the Union Street Bridge and saluted us as we drifted under him yesterday?

Then there were the two boys, one swimming far below the North River Bridge, the other high overhead, straddling the outside railing beside Route 3A, listening for the sound of his buddy’s voice above the whizzing traffic yelling, “Matt! All clear!” so he could fold his arms around his chest, bullet down the long reach then kick up sputtering in the current below. Maybe I should mention the three irons signs, planted in the woods at sharp cuts in the river that describe a long departed shipbuilding past? Or how, winding our way under the highway ourselves toward the sea, we arrived at “The Spit” where the river meets the ocean at an expanse of hard white sand exposed during low tide only; hosting a single hand-count of human occupants on a summer Tuesday afternoon.

Right. That’s it. That’s the topic.

Churning teal water undercutting a hard-packed beach sculpted in ripples, shaped by the tide’s retreat. A high-pressure blue sky dotted with lazy clouds shadowing distant hummocks of grass covered dunes. To the east, gulls pecking at the edge of the breaking sea then running on fast tiptoes as the waves roll to shore.

Anchoring the dory, we spread a beach towel out on the crusted sand, unpacked peanut butter sandwiches and lemonade and sat legs extended, while the sea terns peeped and dove overhead, water smacked the broadside of the bobbing dory; the heat of the sun stung our burning skin and a motorboat on the other side of a bend in the river droned long before we could see it.

If this is vacation, I’m all for it. 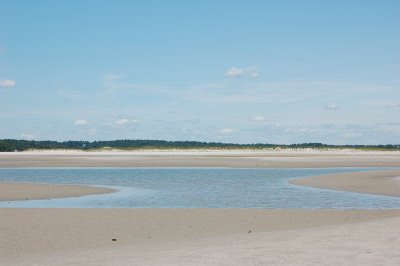