Over the many years my sister has lived on a different continent, she and her family have visited often. Last week for the first time though, our 25-year-old Australian niece arrived in town without her mum—having spent the last few years working to afford a quick stopover with US relatives, followed by a back-packing jaunt through Europe. Before she arrived, I wondered if my husband, my daughter and I, two almost-old farts and a blossoming 17-year-old, could offer enough entertainment for this eager world traveler.

Five minutes after she stepped off the train, the answer to that question voiced itself in a resounding “yes,” as a result of ropes of comfort and attachment that thread though bloodlines from one generation to the next. Though my niece is taller, with a different hair color and a clear Australian accent as opposed to her mother's hybrid inflection, I could close my eyes and almost believe my sister stood in front of me. Even when I opened my eyes, bits of my sibling presented themselves—in front teeth that overlap the same way, in the light curve of a narrow nose and almond shaped eyes that smile a chocolate glint, though my sister’s eyes are cornflower blue.

Further reiterations emerged as, just like her mom, she voiced enthusiasm for a car tour as soon as she stepped off the train and the way, as is my sister’s custom, she paced our yard, exploring the gardens once we arrived back home. Her mother’s habits appeared in the glass of water she refilled regularly, her eagerness to help in the kitchen and subsequent ease in doing so.

On Friday, this lovely Australian and I hiked through World’s End, a coastal park heaving with mounds called drumlins, spoon-shaped eruptions formed by early glaciers. In 1890, Frederick Law Olmstead, a renowned landscape architect, designed the layout for a large subdivision on the property. Thankfully, the houses were never built. Unpaved carriage roads remain however—wide expanses lined with the thick trunks of ancient maples, cart tracks that twist by waving grasslands, fields of Timothy and clover sloping toward the harbor.

This unspoiled landscape looks that way it did 100 years ago and though we were handed a map upon arrival, most of the paths were as well marked as they might have been back then. That is to say, not.

Consequently, just as when I tramped this area with my sister a few years back, my niece and I got lost, but it didn’t matter. Eager for adventure, she agreed to a trek over loose shale on a winding pathway over the course of which we were forced to sidestep dense poison ivy. Emerging into a clearing, we stopped open-mouthed atop a granite cliff, staring down at a quiet waterway I’ve never seen before—which was empty with the exception of two small vessels hosting a group of picnickers far below. Far away, a lobster boat throbbed and churned a white wake through teal seas; closer in, swan parents guided juvenile cygnets calmly across still water.

Retreating from the ledge, we retraced our steps toward a more traveled path and walked for a couple of hours, ever conscious that the scenery appeared the way it always has. We were mindful too, I think, of things that transcend time—for my niece it may have been way the knock-kneed step of her hiking partner mirrored her mother’s gait—for me; it was traveling through history as if parallel to a soothing echo, distant reverberations sounding from a favorite sister. 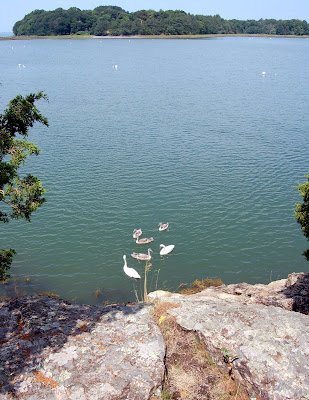 What an incredible tribute to your family. You are all so lucky. :)

what a beautiful post you have here! I love the parallel you created and the verbal imagery is absolutely awesome! Thank you for sharing...

I'm smiling. What a lovely day and how sweetly you shared it.

She, she led you on an adventure instead!

Not only was that a lovely story, but a reminder that we really do pass pieces of ourselves down through the generations that follow. Very interesting.

What a beautiful post! Hope you enjoy every moment you have with your niece. :)

It sounds like y'all had a wonderful day reconnecting.

Reading this post slowed my heartbeat as I trekked with the two of you.

Somehow reading your blog has a calming effect on me, m'dear. It's like a little oasis of mellow in the hyperkinetic, overcaffeinated blogospheric circles I usually wander in.

Thank you for that.

your exuberance came through clearly and was difinitely catching.. gifts from family come in several different packages, don't they?

Beautifully written! The photograph as always is beautiful also. And also the one on World's End.

I sent you an email. I hope you got it.

So glad you had such a lovely time with your niece that reminded you of your wonderful sister.
Ann
p.s. That's my delete above. I made a mistake in what I'd written and wanted to fix it!

Hope you're having a lovely week.

This is a beautiful post! Makes me miss my sisters but not in a terrible way, just in a kind of sweet way.