What You See isn't Always What You Get


When we bought our property twenty years ago, it was surrounded with pines and dense hemlocks.  Often, I sat in my backyard in pajamas, sipping coffee on weekend mornings because no one could possibly see me.  Our adjacent neighbor’s property was so thick with evergreens, a previous owner named the acreage “The Hemlocks,” and proclaimed it with a rustic sign still hanging beside his driveway.
After a few years though, a blight called the Wooly Adelgid attacked the lands surrounding our home. Petite, cottony balls appeared on the undersides of branches.  Trees began to yellow, loose their needles and fail.  In their weakened state, our hemlocks were no match for wind or snow.  Many snapped or tipped.  As of today, we have few left and those that remain are gasping.
About five years ago, one of the neighbor’s trees broke about midway, wedging itself on one of our our own specimens, leaving a dangerous bridge over the stone wall edging our property lines.  He had the top of the tree removed, but left a jagged trunk with horror-movie branches, and although it blended with his remaining trees, it acted as a visual reminder of the devastation caused by a pest imported from Asia last century.  This spring, he had fourteen more dead hemlocks removed.  To my disappointment, he left the remains of the tree that had tipped over the wall.  With nothing behind it; the skeleton branches catch my eye whenever I look toward my garden.
When our time comes to remove trees, I plan to contact him to ask if we can have the offending trunk removed.  In the meantime, I look at it regularly and sigh for the memory of that which used to thrive around us.  And while I can't change that the trees are gone, at least last night I had a reminder that sometimes beauty ends up being about perspective.
Because, when I looked out the window after supper, this is what I witnessed. 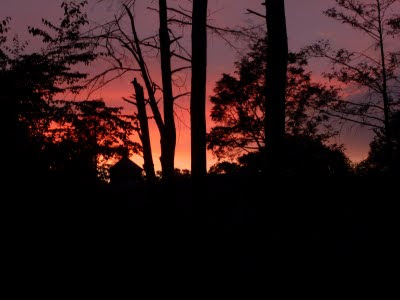 We lost an oak to a blight and it was sad to cut it down.
Do you still go out in your PJs?

No PJ's Alex. There is a clear shot from my neighbor's windows to my back yard now because so many trees are gone.

I feel your pain! We too, are surrounded by trees: mixture of broad leaf and firs/pines. We dread any bug getting on them, but recently heard "sudden oak death" has been spied within eight miles of us. We have some oaks that are 300 + years of age and would hate to see them go.

That was one beautiful sight to behold from your window. Sometimes as we lament what has been lost we forget to appreciate the new beauty around us. You clearly do not fall into that category.

The house we moved from had a backyard like that. I miss it so much, with its total privacy in the midst of a suburban neighborhood. So sorry about your trees. What a great loss that is.

I so hate losing any tree ... but that view is beautiful at sunset.

What a nice way to look at things. So sad to lose the beautiful trees, but like most changes there is usually something good in it. This one will take a long time to get over though as those trees are basically irreplaceable at least in our lifetime.

Wow! Now that is a lovely sight to behold. I love trees.


Lee
Tossing It Out

" horror movie branches' - Love it! And what a gorgeous photo! Its definitely sad to have to remove trees especially if they've been around for so long they are part of your everyday. Deep sigh.

this is so beautiful...trees are my solace; the woods my place to rejuvenate and heal. We couldn't see our neighbours when we bought our property. Then hurricane Juan happened. We have many jaggedy trees about but they are ours and we deal with them as we are able. I must say that I like their wild look and know when I walk in the woods up the hill that there are trees there in every stage of life and decay...