A Gift to Me


Every year around this time, I spend a morning at our Festival on the Common, a favorite holiday event I've written about previously,  here and here.  I don’t know why this unassuming gathering gets to me so much, but once I arrive, I wander about with a huge lump in my throat, thinking how glad I am to be a part of it one more time.

It's the same now as it was before we starting bringing our daughter, and she's in college now. Three churches come together to kick off the season and trust me,  there is nothing high tech about it.  In fair weather, Santa sits on a sleigh on the common and kids hop on his lap for a photo opportunity.  Occasionally, like Saturday, he’s forced to commandeer a back room at one of the common churches when snow makes outdoor photographs impossible.

This year, fat flakes dropped in a swirl that made me dizzy as I walked to my first stop, the Congregational Church, home of the silent auction, a raffle for a steak and shrimp dinner and a bake sale.  But as always, I was in it for the clam chowder, a hot, thick bowl of it that warmed me to the core.  Now that I work for the town, I know ever so many more folks, and as I sat at a plastic covered table in a church office blowing on my steaming broth, I received friendly waves and greetings.
Once I scrapped the bottom of my bowl, it was time for my main event.  Fifteen or twenty years ago, a local minister was inspired to form a town band.  Folks who used to play came together in a kind of rag-tag group long on enthusiasm and short on practice.  I remember laughing the first time I saw them, at a Memorial Day Parade…not in a mean way…they laughed at themselves too.  Then, one of the town music teachers stepped in and began leading them.  Now they offer credible performances during local events around town and by far, their concert on festival day is my favorite.  Musicians range from recent high school graduates to folks approaching 80, and they gather to play inspirational pieces as well as traditional carols and popular holiday songs.  Donations from those in attendance go to the local food pantry.

The church in which the concert is held was built in 1714 and resides as the centerpiece of our town common.  As always, I climbed to the balcony ringing the church on three sides, sat on a velvet-cushioned bench and leaned forward as the music rose up. Overlooking the players, I could see their joy as they performed, a happiness that transferred itself to me when half way through the concert the conductor launched into traditional carols, and we were all invited to sing.

Afterwords I stepped down the steps humming, then crossed the street to the Unitarian Church Jumble sale.  Like every year, I  fingered gently used table linens, pottery and books but didn't buy a thing.

The day had already given me everything I needed. 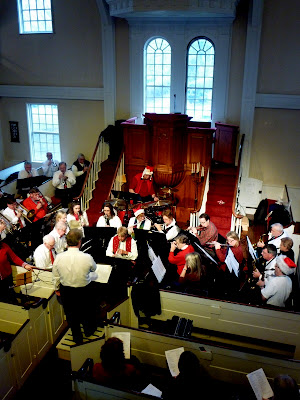 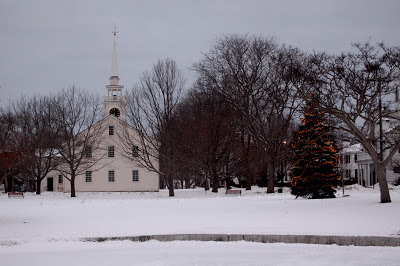 Email ThisBlogThis!Share to TwitterShare to FacebookShare to Pinterest
Labels: 2012, Festival on the Common

Sounds like a most amazing festival to kick start the Christmas season! How lovely!

Are you sure you don't live in Little Compton. That common looks exactly like it! Then again, it is New England.

Again you make me homesick. But thanks for the memory.

Also, I'm sending you an email.

You have a lot more history there than we do. In 1714 Michigan was still wilderness belonging to the Indians. I love clam chowder and I bet it was delicious. Do you really have snow like that already or is that an old picture? It's been fifty degrees here of late, bare dead grass, black languishing trees and a garden that doesn't know whether to sleep or waken. I would trade all of that for a blanket of white.

Thanks for sharing the festival with us. A good choir can transform a ceremony, gladden the heart and uplift all within earshot.

That picture reminds me of the church I used to attend in Marshfield.

Sounds like a wonderful time! Now I want some clam chowder.

It sounds magical and beautiful!

What a lovely day. I need something like that to get me in the holiday mood.