In Spite of the Cold


Here’s the thing about where we live.  It gets chilly most winters, sure.  But there’s no guarantee a cold spell will descend long enough to form ice on the pond down the street.  Some winters, the skating club perched on an old millpond on the outskirts of town doesn’t open at all.  Unlike northern New Hampshire or Vermont or, say Michigan or Minnesota, when the opportunity to lace up the steel runners and fly across the rutted ice arrives here, it’s fleeting.  So the frigid temps we had last week, combined with the brilliant sunshine Saturday afternoon and forecasts of a warming trend conspired to provide something like a textbook day for skating--and, for cold weather photography too. Only, I was not alone.

At the skating club where I headed first, inside, I knew a wood stove would be churning a dry heat.  After framing a few pictures of folks gliding across the pond in front of it, I planned to warm my cold hands with a cup of hot cocoa.  But, nope.  Cars parked every which way around the worn red building.   A row of SUV’s lined the road about a quarter mile in each direction.  I couldn’t find a place to park.  Scratch that potential image of Americana.

At Lily Pond, the ice fishermen were out.  I pulled into the water plant, the only safe place to leave a car.  Pick-up trucks lined the driveway.  The one available place from which to take a non-obstructed view photo (I'm not tall enough to see over the reeds) meant climbing through the snow and I wasn’t wearing the right boots.  I headed toward a tiny street on the other side of the pond…but from that direction, I couldn’t see the fishermen and the sun was dead on.  I got skunked there too.

As the late afternoon sun prepared to drop behind the tree line, I drove toward the harbor, hoping for that golden light that colors everything in sepia tones.  Lobster boats floated amid an Arctic slush of sea water.  Powdered snow squealed underfoot as I climbed up the wooden ramp to the shuttered yacht club.  I got a few pictures off before deciding icy salt water may be one of the coldest looking things in nature, but it was the polar wind blowing off that water that caused the real sting. 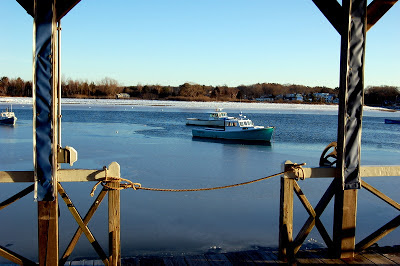 With aching fingers, I climbed back into the warm car and steered toward Meeting Pond on the common.  Even after almost 21 years, still there are times I am awed at the classic composition of New England our town conjures up.  This was one of them.

Email ThisBlogThis!Share to TwitterShare to FacebookShare to Pinterest
Labels: Cold weather photography, Skating on the Common.

Very pretty. We had the polar blast last week too (comforting in a way). Our weather is not that constant anymore and nobody has yet dared to ice fish. One week it's cold, the next it's raining. Snow last night, rain today. The younger generation will have no concept of the winters of old.

That's a great picture. I miss ice skating but not the cold.

Unfortunately the snow we get often ruins the ponds and lakes around her for skating, which happens to be the only winter I activity I enjoy and one I'm not too awful at. And that piccie is so New England, reminds me a little of the Church I sued to go to when I was young in Marshfield.

Both pictures are awesome. It's been years since I went ice skating.

Stepping into your blog feels like walking into Americana. I just now figured it out. Does it feel like time hasn't really moved in your town? Or is it just me reading it wrong?

BTW, I dedicated something to you on the HERE'S TO YOU MONDAY post. I hope you get it. It relates to something you wrote last week. I had a devil of a time finding it... just so you know;)

The pics are worth the aching frozen fingers!! One must suffer for one's art! :-) But I'm glad you got back in the warmth of your car asap!! Take care
x

Beautiful!! I remember how cold it gets up there!!

I commented on your comment on my blog. I would tell you what it was, but you might need to watch the video again to put it all together. ((Hugs))

Your pictures are very Currier & Ives. It would be kinda nice to visit your area for a quick fix of winter, but I don't really miss living in a cold weather area. (We still have our old rusted-out snow shovel under the house, but here in Georgia, you're more likely to need it to shovel pollen than snow.)

I miss the winter trips we'd take to New Hampshire to visit hub's parents (they've since passed). So much was like driving in a post card. But I'm afraid I'm more for looking than doing. The only time I went ice skating I fell so much I looked like I'd come out of a war zone or something. Just couldn't get the hang of it, a disappointment as I'd zipped around on roller skates when a kid.

I love the light in the first, and the second would be totally appropriate for your next Christmas card :)

You have such a way of illustrating your posts with the perfect photos. :)

Gorgeous! Seeing snow makes it seem like we live on different planets. It was 83 degrees here today!

(Not bragging, incidentally. Way too early in the year to be that warm. Even for us here in South Texas.)

I was thinking though, about your adventures trying to get pictures and how hard it is not to have all the less glamorous things in them--all the cars and such. That's sort of how I felt traveling Europe. Because when you envision walking through the Notre Dame cathedral or kissing the Blarney stone, you don't envision the hoards of tourists trying to do the same thing. It does kind of make it seem a little less exciting, maybe. And certainly, the photos aren't quite the same. You almost have to use your imagination and pretend like you're the only one.