When my dad passed away almost ten years ago, his children divided up his furniture.  I was the recipient of two circa-1969 mustard-colored vinyl chairs and to say they weren't attractive would be a compliment.  Since then, they’ve lived in our finished basement, for the most part, out of sight out of mind.  In truth, they were a better quality furniture then we’d find today, but the cost to have them reupholstered would have been prohibitive.  Over the years, my husband and I talked about getting rid of them, but I couldn’t do it.  The last time I saw my grandfather he was sitting in one of those chairs. During one of the last visits I had with my father, he had the other stacked with paperbacks he’d read, and I returned home with John D. McDonald and Elmore Leonard.  Those books are still on my shelf.

But still, sometimes you have to broom sweep the fragments from life to start things looking fresh again and when the pile of unused "stuff" we’d been collecting behind the false wall of our basement expanded beyond its assigned pallet, it was time to clear it out.  We spent a week hauling things out to the garage, polishing and pricing for a Saturday yard sale.  Anything that didn’t sell would become a charitable donation, or go to the dump.  Nothing was allowed back into the house.

When my husband mentioned selling the chairs, my stomach dropped.  But the night before the sale, I agreed it was time to let them go.  Early the next morning, we washed them down, placed them at the bottom of the driveway.  We situated a coffee table with a basket of dried flowers on it between them, thinking the chairs would be perfect for a college dorm room, or a graduate apartment.  We figured they’d be the first thing to go.

By 11:00, I dropped the prices.  At noon, I dropped them again.  The coffee table went, but still, no one looked at the chairs.  Every time my husband looked down the driveway he said, “I’m not lugging those things down to the basement again.”

The yard sale ended at 1:00.  All the while we packed and organized the unsold items for charity, people trickled up our driveway. Most of these late-in-the-gamers made a purchase, but not a one looked at the chairs.  I thought about it hard, but even I didn’t want to haul them back downstairs. At 4:00 I carted them street side, marked them “free” and left for the grocery store.  There a neighbor found me.  “Those chairs at the bottom of your driveway.  Can I store them in my garage for my son?  He just rented an apartment in the city.”

A half hour later, they were gone.  Lesson learned.  Sentiment may be priceless, but butt-ugly needs to be free.  I picture the chairs, sitting in some bare-bones apartment enjoying their new lease on life.
Somewhere, my grandfather and my father are elbowing each other in the ribs.  “Can you believe she thought about keeping them?” 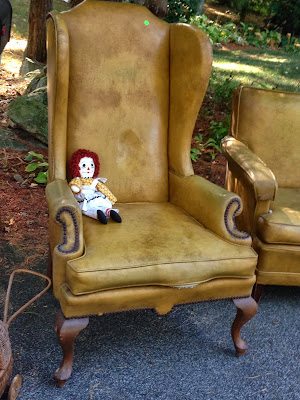 "Sentiment may be priceless, but butt-ugly needs to be free."

Oh, Liza, but I felt a pang for the chairs as we're going through the same thing here. I'm going to remember how you described your grandfather and father nudging each other. Great job putting so many emotions into such powerful imagery! Thanks! (As the oldest, I sent my sister, the youngest, some family stuff I thought she'd want for her kids--she wasn't as enthused as I thought she'd be. *sighs*

Awwwwww the memories and sentiment to these chairs are priceless and remain with you forever!

The chairs however are now on their next journey to create new adventures for someone else! Take care
x

I would have taken those chairs in a heartbeat!

I second Dianne! Yeah, they had to go. Better to just hold the memories. Besides, now they can be used by someone.
All in all, it's just stuff...

Yeah. I can picture them ribbing each other over those chairs.

So many great things about this story. I felt your agony about letting something sentimental, but completely unusable, go. I also felt your pain when no one bought them. But, the best was your own revelation about what they were: butt ugly. And that is always free. hahahaha.

Kind of a funny, sad story. I have some of my grandmother's jewelry. It's ugly, I'll never wear it, but I'm going to pass it on to my children.

Oh, I love this!
I'm not too sentimental really- grew up liquidating estates and getting rid of lots of butt-ugly!
So cute how your revelation came to be and the story was one of my favorites that you've ever told. You really came through on this one.

Well....the color might be ugly but the design is unique and I love the feet!!! I'm sentimental too, hold onto things way too long. But if you have the object to go with the story, people believe you.

Funny thing is, I've seen people completely ignore stuff marked "free" because they don't think it's worth anything, but if the same object has a minimal price on it, they snatch it up and think they got a real deal.

I've so been there. Last Saturday with our own yard sale, as a matter of fact. Why is it that what we think will go first is still there at the end?

yep, those are some pretty unattractive chairs - but if I lived closer I would've taken them because they're probably well made and I have a friend who reupholsters. I'm glad they found a new home!