This is my April contribution to Alex Cavanaugh's  Insecure Writers' Support Group.  To link to more posts about writers helping other writers, click here. 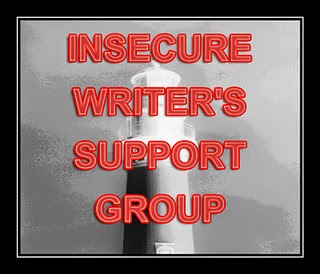 I feel like I’m the only person in the Blogosphere not incorporating this IWSG post with the letter B in the A-Z challenge.  Best wishes to all of you intrepid folks participating.  As for me, well,  I’m in a “resting stage” with my current project and conventional wisdom dictates I get busy with something new.  To date, I haven’t come up with anything noteworthy, but I know from experience, inspiration comes from weird places.

Take my, first ever, get to the end of a first draft and stop novel.  It started as a result of a “scene storming” exercise.  I wrote a few hundred words, and then just for giggles decided to see if I could keep going until I got to the end.  Turns out I could.  I just didn’t know how to fix the mess afterwards.  This is how that one started:

By the time the real estate broker’s car came to a full stop by the “For Sale” sign in front of 52 South Main Street, Shelby Richmond had mentally unpacked her boxes, made the beds and scrubbed the kitchen floor.

The second book I wrote…this one gets full credit because I revised it seventeen times, wrote a synopsis, a query letter and submitted it to agents, started with a sentence that rolled through my mind one night, during that fog point between awake and asleep.  I forced myself to get up and write it on a scrap of paper—which I stuck by my computer, until the story it related to took shape in my brain months later.  That one started like this:


The queen of the 1974 Tarrant County Honeydew Festival abdicated the throne forty-eight hours after her coronation.

The third project—the one I’m currently resting, was triggered by an illustration accompanying an essay in Yankee Magazine about a damaged apple tree.

Marnie St. Marie knew she hadn’t taken a drink for three weeks, but when she saw the boy in her ailing apple tree, she wondered.

So today, I sit, sniffing out inspiration like a dog.  Where will it come from?  A story on the news? Action I see on the street?  A picture? A tweet?  I don’t know.  But I woke up this morning with this blurb rolling around in my head.

By the time Winnie Parker reached the derelict Walker estate, the rock she’d been kicking the whole way felt like an old friend.  Which is why, when it took an odd bounce and scuttled under the wrought-iron gate, she had to reach in to retrieve it.

Hmm.  I think I’ll chew on that for a while.

Where does your inspiration come from?

Just wrote a very long reply that was eaten by computer! Basically it was that I need less inspiration and more revising! My fave inspiration was a comment by an artist I knew at a gallery opening. She said she had been a rock walker at Peggy's Cove. Rock walkers kept tourists from the dangerous rocks near the water. I wrote a mystery called The rock Walker.

Inspiration is everywhere. I have WAY more ideas than I'll ever be able to write about. The hard part is deciding which one to work on next.

No, Liza, you are not the only one. I'm not doing the challenge either. You will know when the time is right what to focus on.

You have some incredible first lines already. Very intriguing. Makes me want to read more. I like the one you are toying with, as well. Maybe just do some stream of thought writing? You never know what will emerge during those sessions...

Those are all great snippets to work with. My current inspiration came from a song.
And be glad you're not doing the Challenge right now. I'm about to go into meltdown trying to keep up with both...

It's amazing where new stories come from. Meeting the characters and seeing where they'll go is lots of fun.

Wonderful first lines. Best of luck to you.

My inspiration comes from asking "What if" questions. It can be a fun little experiment. :)

I always have a couple of ideas to select from when I'm ready to start something new. I have a difficult time settling on one or the other.

You're not the only one NOT doing A-Z! I'm not either. But I admire those who are.

Your inspiration comes out pretty darn smooth and cool. I'm sure your next idea will marinate until it's ready to show itself. Good luck!

YOU, my darling girl, are my new hero. Wow. The way your mind works is awesome. You don't happen to have a few brain cells laying about, eh? Or is it lying? Hmm. Dang, I can never remember.

I get inspiration from all sorts of places, quotes, movies, books, pictures, atmosphere, a memory that gets triggered, writing prompts too.
My current WIP was triggered by a really different picture of the four hhorsemen of the Apocalypse. Sometimes from characters themselves.

Hey, I didn't join the A to Z challenge either, so I feel your pain. But there was no way I'd have the time to post that much.

Those are some interesting beginnings. I tend to think of the final scene first and then figure out how to get there. So I usually have trouble with openings.

thanks for stopping by my blog.

I'm not sure where inspiration comes from. I think it's about the same as you. Could be a song, a picture, a thought...and you never know when it will hit.

Some days, ideas pound me like heavy raindrops in a thunderstorm. Other days, I couldn't find one even if it fell out of the sky and hit me in the head. Inspiration is a funny thing. It hits when we least expect it. For me, quirky, strange stories in the newspaper or on the evening news seem to spark ideas. Still making my IWSG post visits. :)

My inspiration comes from characters showing up in my head, like yours, but you write your blurbs better than I do! Blurbs are hard...

They're all intriguing, but I loved the fourth first line and the second one (the beauty queen one) was my next favorite! Great hearing about where you got the inspirations--it's really a fascinating subject.

I enjoyed reading your insight-ideas are everywhere. We just have to go with them when they attract our attention-I want to know about the boy and the stone ;D

I came sniffing out the poem you wrote :) Inspiration comes to me so often from music. Or the stray comment of someone in earshot. Every word seems to float in a sort of bubble...waiting for a pin prick. It explodes and falls into a pattern at my feet. Seems I barely contribute, but to pick up the pieces and place them on a page.

I enjoyed them all! I'm also not participating in A to Z this year, and still feel badly that I haven't been visiting enough. Best of luck in taking the next step with Marnie and Winnie!