I left work the other day in my sweats and sneakers to discover a friend similarly clad, on her way for her afternoon constitutional.  My plan was to walk off a major chunk of the ten thousand steps a day suggested by the heart-healthy class I’m taking, so we joined forces. I tend to switch my route up to forestall boredom, and as I described my planned course, which would end up on a path behind a “private property” sign, she responded, “I’ve never been there.” The property in question is a retreat home for Jesuits overlooking the channel leading out from our harbor.  When I get there, I sneak under the chain hanging from two stone pillars marking the entrance to the driveway, and hike the edges of the property far away from the main house, convinced God created this overlook for everyone.  This time I enlisted my friend.  “Just don’t get me arrested,” she said.

It was hard to believe it was November.  By the time we arrived, the afternoon sun highlighted the estate across the water (owned by descendants of the John Quincy Adams, where I no longer dare to trespass although I have, but that’s another story).
Walking with my friend that day, I saw the view from her eyes, new eyes, the kind I had when I started exploring around town five years ago. The sky was wide and clear, the tide low, the flats filled with seagulls and terns pecking in the mud.  Across from us, the marsh grass on the barrier beach has whitened to straw.  I think of November as dull and drab, but on this day, it was anything but, the muted colors, grey, taupe and rust reminding me that every season has beauty as long as we allow it to seep in.

The harbor is mostly empty now, except for the working fleet, a handful of lobstermen who keep their boats in all year.  And as we stood on the steps of an empty stone boathouse, they motored in--a sight I would have missed if sometimes I didn't disobey "No Trespassing" signs. 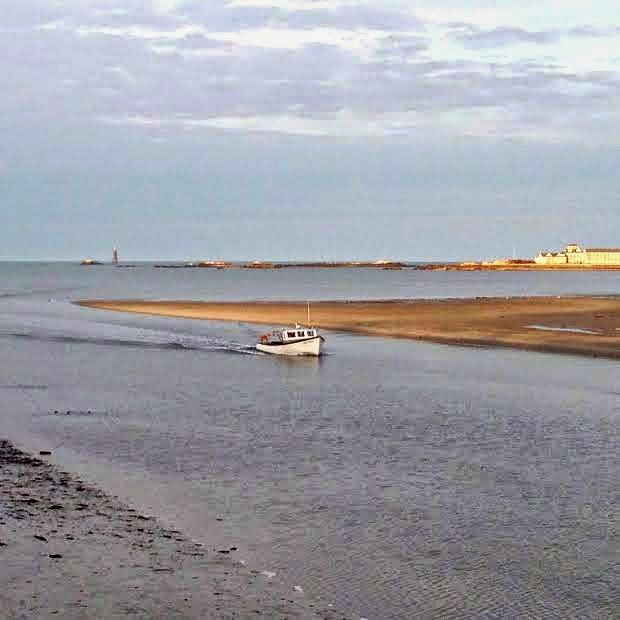 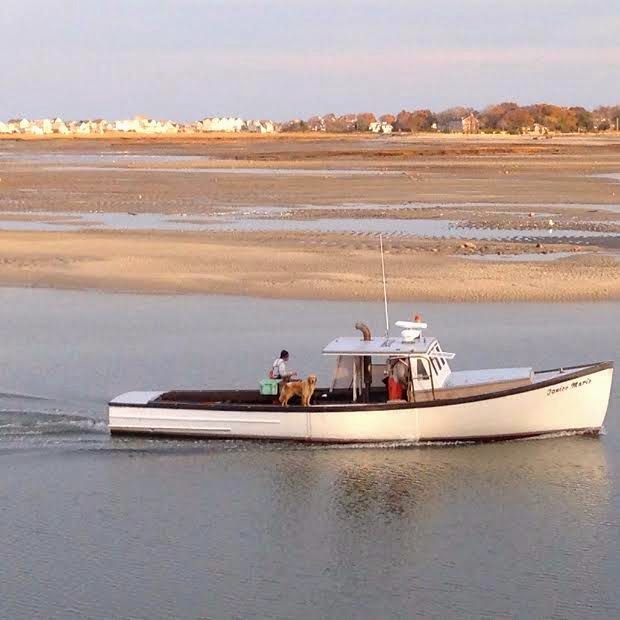 I've traveled a lot more than my wife and it's always a joy to take her someplace she hasn't been and see it again through her eyes. Adds a whole new level of excitement.

It does look beautiful and tranquil. What a nice Nivember day you had for this walk. I thought your area was covered in snow from last weeks storms.

Thank you for this is an excellent reminder - "...that every season has beauty as long as we allow it to seep in."

You always share such great pictures. I wish I had a greater variety of places to walk without having to drive somewhere.

glad you convinced your friend to "break rules" and embrace the November cloud layers. Lovely pics and I wish I could walk there and "trespass". You are forgiven.

I want to come back as a Golden and be a fisherman's pet.

You are a rebel, Liza! :D Wonderful photos. Looks like a pretty place.

"cival disobedience" in your own way,, reckon? Good for Ms Liza,, lol, glenn

Look at you going where others fear to tread. :)

It is exciting to see something new through someone else's eyes. I think it's why I like reading so much. I bet you do, too!

Having traveled all over the states and a few other countries I've learned the value of seeing the beauty of a place not based on preconceived ideas of beauty back home. There is a lot of hidden treasures if only you take the time to look for them. :-)

I'm looking at your pictures. Oh my, we have snow, lol! what a difference and thousand miles makes. I love looking for the dance tracks of the birds in the sand in places like this. I look at it as artwork or a story and try to guess what the other tracks or marks in the sand came from.

John Quincy was my great, great, great plus a few more greats grandfather on my mom's side. Small world. :-)

You know, that little bit of prose would make a great beginning to a short story. ;)

Lovely Liza, it makes me so happy that you break the rules sometimes! No good life always lives within the boundaries. Thank you for reminding us of looking at all beauty with an appreciative eye.

Love seeing these pictures and pretending I'm there :)

Oh, I would totally break the rules and trespass with you! We always find the most amazing things by straying from the beaten path. And, ya know, even if the authorities "caught us,"what are they gonna do? Arrest a couple sweet old broads like us? I think not!

I love taking folks around to the places I love here in town and seeing them again through their eyes. I wonder if I'll ever tire of it? Love your descriptions. And you're right, sometimes you have to trespass to really see something new.