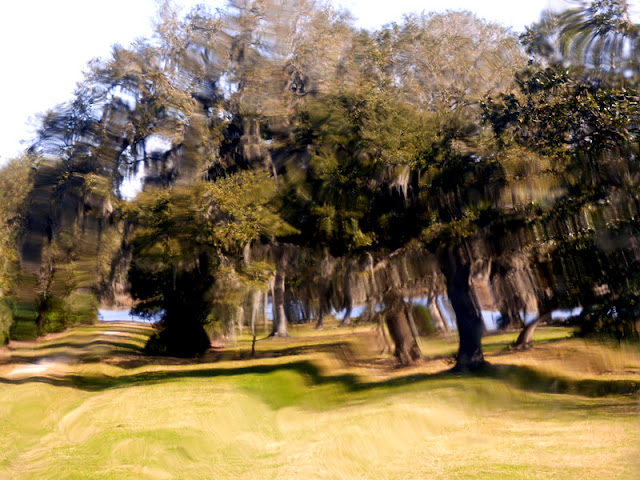 Where was I last week?  It’s a long story…a sixteen-hour car ride story, but I’ll condense it.  We took a road trip to Charleston, SC for, well, I’ll call it family business. Mission accomplished, we put on our rally caps and did what three self-respecting tourists with less than twenty-four waking-hours together in a city must do.  We visited an island, took a carriage ride, walked through the market, strolled the waterfront, stopped for a drink, went out to dinner, and toured a plantation before two out of the three of us flew home.  Out of all of that, this is my favorite picture…the view from an original 1740 window of Drayton Hall, a “stabilized” (not renovated) plantation on the Ashley River.

Less than a week later, I can assure you that sixteen hours in a compact car is entirely too long, but twenty-four hours in Charleston is way to short. The good (?) news?  We’ll be doing at least one, but likely two, return trips.

Can anyone explain to me why shrimp and grits never made it north of Virginia? I feel cheated.

You saw quite a bit in just one day. Which island? Did you see Fort Sumter?
And sorry, I think grits are disgusting... Not my thing at all.

Neither my husband nor I can get into grits - we tried them a few different times when we first moved south, but they just don't do anything for us.

Touring a plantation sounds like fun. The 16 hour car ride...not so much.

Wow, you packed a lot into twenty-four hours. Charleston is a beautiful place. There is a lot to see and do there. We visited there just briefly a few months ago, and I hope to go back again someday too.

quite adventurous dear ,hope you felt better later as it is painful to be in such tiny car for s`o long ,have a blessed day

lovely pic. I've been to Drayton Hall. Love Charleston. They keep the shrimp and grits there, so you'll keep having a reason to visit. So much to see and do and eat in this world - so little time. Glad you had fun. Now time for laundry

Oooo, wavy, hand blown window panes... warbly. :) As for shrimp and grits... I don't care for grits so I wouldn't ever miss them.

Charleston is a gorgeous city. I love visiting there.

Have you seen the GRITS T-shirt? Girls Raised In The South. Does that answer your question about grits being a southern food?

Seriously, I can't explain it. I remember as a kid when we'd travel from Ohio to somewhere south my dad would be chomping at the bit to make it far enough so that he could order grits for breakfast. At the time I didn't see the tastiness there, but I appreciate them now.

Grits and sweet tea. Sweet tea is catching on in the north. Grits, not so much.

I'm not a grits fan but I do like Charleston. Hope you can spend more time on fun stuff on the next trip.

Charleston is one of my favorite cities! The one regret I have is that we didn't visit Charleston often enough while we lived in South Carolina.

I don't like grits, but I LOVE LOVE LOVE shrimp and grits. And you must remember...in South Carolina, it's not sweet tea, it's swite tay.

Charleston is one of my favorite cities to visit. I have done the long car ride to there, but last year took a plane. It was not cheap, but so much better.

Hi Liza .. shrimp and grits does sound good ... and I've been wanting to visit Charleston sometime: I will get to do both.

Glad you had a good trip - despite the cramped style ... but look forward to those future trips ... cheers Hilary