Although we are ten days or so into summer, it seems we are far behind.  Many (note I did not say “most”) years we have a lead-up; early June stretches of Cerulean sky and dry, hot days.  This year however, the season limped in on crutches, advancing a few steps then pausing, erect but unable to release itself from the immobile cast of a damp, cloudy spring.  So now, on the first of July, when we’ve finally experienced a three day stretch during which we’ve risen to sun, it all feels new.
We were still using the down comforter last week; it remains folded at the foot of the bed.   I am unaccustomed to open windows, or the sound of the Carolina Wren   in the hydrangea bush just outside our bedroom. Between my work schedule and the cold, I didn’t spend much time in the rock garden until yesterday and when I climbed up, the crop of mature weeds I encountered there startled me—unlike me, they appear to have flourished in the cool weather.  As I crouched among the ledges, yanking out tangled clover and repositioning the foxgloves and sun drops that seeded themselves wherever, the sun hauled itself over the pines lining the yard, and for the first time this year, summer seeped through my pores.
So early today, when the house held a residual chill but again the sun was out, I brewed myself a cup of coffee, sprinkled yogurt with granola and clambered to the top of our ledge where I plunked myself down, barely flinching at the touch of cool granite.

During my breakfast, bees bumbled into daisies and cleome.  Below me, budding monarda and yellow coreopsis dueled for space and a tinge of blue seeped through green hydrangea blossoms.  A chipmunk skittered over a lower rock, freezing for long seconds on encountering me.  When I lifted my coffee mug, he popped beneath a stone and I smiled at his quick disappearance, at the taste of the sweetened beverage, at red snapdragons bowing in the soft breeze, but mostly, at the season that ripened while I worked at the cheese shop, and now oozes warmth through my cold-weary bones. 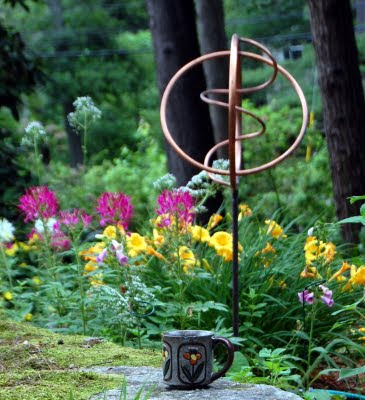 Happy Fourth all!   What are your weekend plans?
Posted by Liza at 3:45 PM

Like the coffee cup photo. Come to my part of the country - summer hit months ago.

Wonderful description of a summer outdoor breakfast.
And the photo with the coffee cup is adorable.
Your summer weather sounds very like here in Ireland, we've just today had the 3rd day in a row of sun, and that is an event! And we're still turning on the electric blanket every night on the bed!

We're having some pretty warm weather and well into summer! Like your description of morning coffee!

I love that cup! Did you buy it or make it?

Cool photo. Great description. Bet the chipmunk wished he had some coffee in a mug like that. :-) Hugs, girlfriend. Have a good one.

It's funny when I read your posts about "home". I remember the spring starting in April, and conveniently forget how cold it can be right up until the end of June.

If it's any consolation, my roses got hit with a blight and only now have come back. My grass is brown and bugs abound because of the wicked heat, and I have to watch the skies around 7pm for severe thunderstorms. (which if you ask me are nothing like I've ever experienced in New England. More like hurricane/tornadoes.)

Relish in the fact you still live near the ocean. Being without it is killing me. We planned a trip back to RI for two weeks, but now it's looking like it's not going to happen. Sad does not describe it.

What a lovely morning you described! I had to sigh and close my eyes for a minute and imagine it all. We are in a long, hot, drought and for a moment I was transported to a more desirable place :)

I am breathing in the sweet scents of you morning garden. While summer may have limped in for you, it roared in here, a fireball of unrelenting heat.
(However our mornings have been delightful.)

As for the Fourth. We will veg out at home and go see the fireworks at dark-thirty.

"This year however, the season limped in on crutches" A perfect desciption. I can't even think about coffee at a heat like this! There's no limping anymore. Summer has recovered and is making up for lost time.

Sounds lovely!
How was your Fourth?
I did go to the beach and then we went to a neighbor's BBQ. Then we walked back to the beach to watch the fireworks. It was beautiful night.

What a beautiful image you have given to me this morning!

And I love that coffee cup - I had a favorite pottery coffee cup that one morning I picked it up and it just broke into pieces - *sob* - never have found another one like it! Now I have another I use, but I still think about that cup.

We stayed inside the movie theatres where it was nice and cold, then watched the fireworks show from the comfort of our driveway. We made s,mores in the driveway and had a great time with neighbors.

You have such a beautiful way with words, an amazing ability to paint word pictures for us. It always makes me want to go where you are.

Summer came with a bang in our area. It was freezing and then suddenly it was miserably hot. The lilies are in full bloom already. I'm not sure I ever even saw tulips. I wonder sometimes how much I really see when I'm awake.

We finally have summer here this weekend.

Gorgeous, you can't beat a summer night time walk, can you?