My husband and I have been trying to get away for a weekend together for a while now, but life has conspired against us.  So on Thursday when he proposed a take-off-before-dawn-and-see-what-the-day-brings-us-trip for Saturday, I was in.

The sun comes up pretty late these days.  Just before seven we backed out of the driveway and headed north on a traffic-free highway to a town where, family history has it, my Irish ancestors landed.  We had no plan, other than to score breakfast first thing, which we did, in a linoleum-floored diner with chocolate and coconut cakes resting under domes at a counter, and no kidding, a waitress who called me “Hon.”

Back in the car, we took a reconnaissance mission and found ourselves on the road to Plum Island, home of a national wild life preserve I’d heard about forever.  Lucky for us the government reopened because last weekend, the place would have been closed.  Still, not knowing what we were in for, we parked and took a loop trail to an observation tower in the middle of a salt marsh where a photographer had camped out with his tripod and two bags full of camera equipment.  He didn’t seem to mind the company.
Fifty feet up, we took in the 360 degree panorama of salt marsh hay waning to tawny, the late fall colors offering pops of muted heat.  The wooden platform creaked under our feet, arguing crows chased each other across the sky, the photographer click, click, clicked as a heron took flight.  As is typical, at the top of the tower, we discovered the battery in our Nikon was dead, but I don’t travel anywhere anymore without my point and shoot, and now of course there is the IPhone.  We took our own pictures, and then descended the steps to a trail toward the other side of the island for an ocean view. 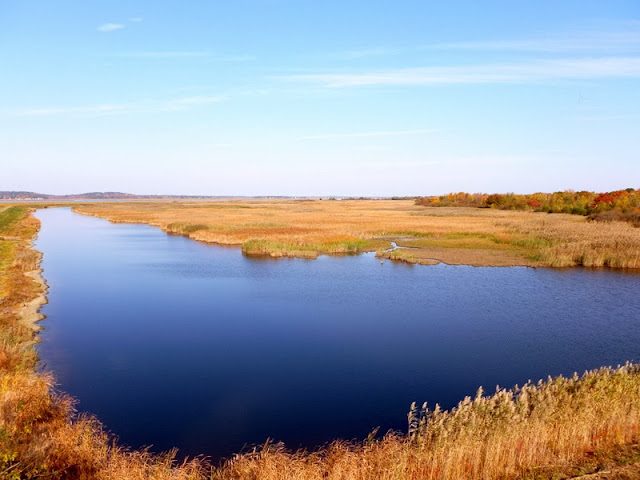 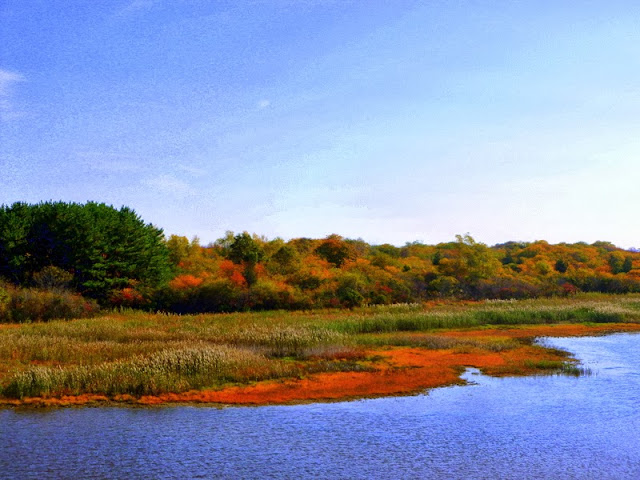 I don’t know what was the best part about the day.  That we followed whim not appointment? The boardwalk stroll through untouched sand dunes to a massive beach, empty of everyone but fishermen? 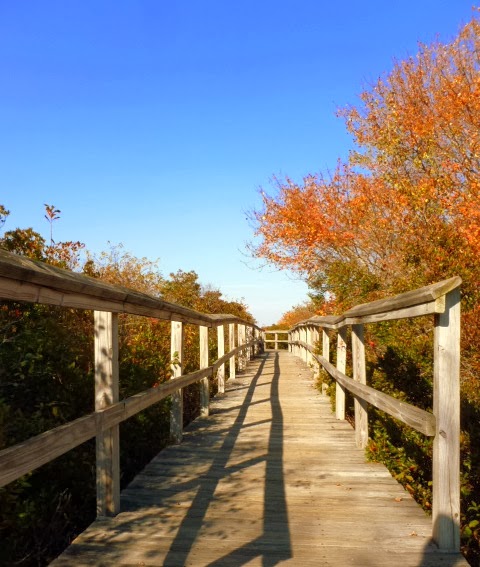 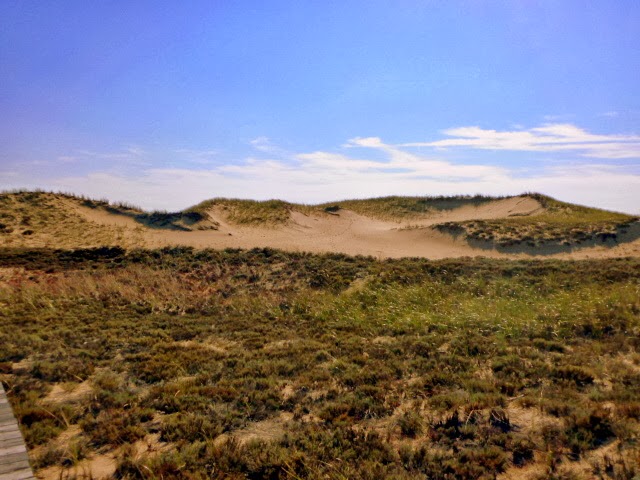 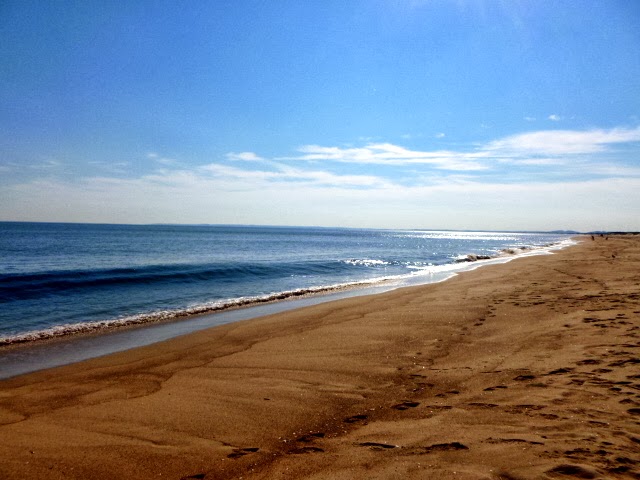 The return to town, to a hulking barn of a place called “Oldies” with row upon row of antiques for sale, many of which knocked on my memory and brought me face to face with my youth?  Was it the walk by the river where working fisherman used bow-thrusters to moor their massive fishing boats?  Or the ride south to dinner overlooking a sheltered marina, still filled with boats although we are approaching November?  It was all of that and then some.

Because, as if the day wasn’t magnificent enough, we got home in time to watch the baseball game.  Hail Mary, full of Grace.  Our Red Sox are going to the World Series.
Posted by Liza at 6:00 AM

Nice photos! You have some great fall colors right now. We are just beginning to see that.
Sounds like you need to take excursions like that more often!

What a perfect end to a beautiful trip!! And what a name! Plum Island!!

What a lovely day!
I'd be afraid that if my husband and I took off with no plan like that, we'd end up at Lowes or Home Depot.

Beautiful pictures! :D And it sounds like a romantic day.

Sounds like a lovely day and your pictures are great as usual. My daughter is attending BU so we're cheering for the Sox too.

Loved your trip, Liza. The spontaneity really appealed. Hmm, think I'm going through the hippie stage I didn't go through. Your photos are gorgeous, especially the colors in the second one. New England's beautiful all year long, but I think fall is the most dramatic--all those colors!

I love the autumn colors and you captured them perfectly. What a great day, "hon."

This was the challenge at Matthew MacNish's site:

I nominated you. I really enjoy this blog and hope that you get back to blogging more often.

Gorgeous photos! I feel like I could just step into the beach one and voila! Instant vacation. *sigh* I wished it worked that way! =)

Stunning photos! We're both on a beach jag - well, think I will be for awhile having finally made it to North West River where we and the fella and the dog are living on a house on the beach. Great for photography as I take the beasty out at the crack of sparrowfart to see the sun rise. I'm just back connected today and so thought I'd wander over and see what you're up to. Go Red Sox!!