This is September's (and the three year anniversary!!!) post for IWSG...it's all about writers helping other writers.  And if you don't think it works, well, keep reading.  You can find more participants here. 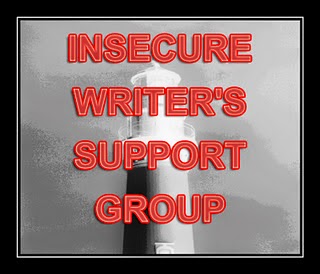 This post is a thank you.
All of you who read this know the ninja king, AlexCavanaugh, the master-mind behind IWSG and the A-Z Challenge and president of the online world in demonstrating kindness and spreading blogger high-fives.

Here’s a story of how his giving actions led to more and more.  The ripple effect, if you will.

While I’m a loyal and diligent IWSG blogger, I have never participated in the A-Z, other than as a cheerleader to those who stay the course. It’s been fun over the years to read and appreciate the themes folks choose for the 26-day challenge.
I’ve told you some of this before.  This year, Robin, from Your Daily Dose chose to feature other bloggers in her A-Z challenge by highlighting one of his or her previously published posts. I don’t include a lot of poems on Middle Passages, but a while ago, I posted one Robin liked, and she featured it during her A-Z.  Next thing I know, all sorts of people were visiting Middle Passages, having been driven there by Robin.  So that’s two thank you’s so far.  To Alex, for, well, everything, and to Robin caring so much and for tooting my horn.

Now here’s the rest of the story.

The same week Robin ran my poem, I received an email from Robyn, Life by Chocolate who’d seen my poem.  She told me about a project she was involved in, led by Julie, The Empty Nest Insider, and Susan I Think Therefore, I Yam.  These talented women were working on a compilation of poetry written by, ahem,  mature woman, and asked if they could use the poem they read on Robin’s blog.  Oh, and by the way, would I send more?  I was flattered.  Honored, really.  But then came the really good part.  Any proceeds from this self-published book (e-book  and paperback) will go to CARE International, a humanitarian agency.  How cool is that?  This is writerly networking and giving to the millionth degree.  From Alex to Robin and then to Robyn, to Julie and Susan, to me and best of all, proceeds to CARE.  That’s a lot more people to thank.

The whole thing has me tickled. I never considered a poem of mine would be seen anywhere but on this blog, and now I feel like they were written for a good cause, too.

Old Broads Waxing Poetic will be released to the world on Friday, via a mini-blog fest.  So, may I ask you to come back then?  And before Friday, think about an “old broad” who means something to you.  Get ready to write about her in comment form.  Or in a poem if it suits you.  ‘Cuz yes, there will be copies of the book to be won.  And poetry to read.  And books to buy.  And people to be helped.  And more thank you's to be said.

Here’s a little blurb about CARE:
Founded in 1945 with the creation of the CARE Package®, CARE is a leading humanitarian organization fighting global poverty. CARE places special focus on working alongside poor girls and women because, equipped with the proper resources, they have the power to lift whole families and entire communities out of poverty. Last year CARE worked in 84 countries and reached more than 83 million people around the world.
Posted by Liza at 6:00 AM

Cool, it's like a snowball effect that led on to more and more great things! I've heard about the anthology, congrats on your appearance in it. :)

Congratulations, Liza! You're writing is beautiful, and so it comes as no surprise that you are included in the anthology!

That is totally awesome!! Isn't it amazing how one thing leads to another? Congratulations, Liza.

Excellent! I love when things like that happen. And congratulations on the publication of your poetry! :)

I guess that's why they call it networking. What a terrific story featuring some of the kindest people I've met in the blogging world. Looks like I'm purchasing a new book of poetry on Friday.

Wow. It is a super duper great feeling to be The Catalyst. Of course, if your poetry wasn't spectacular... it would have all come to naught. But, since it is... look at the bounty! I am so happy for you, Liza. This is just wonderful. Truly.

What an awesome process. Amazing how one little thing can lead to something else entirely!

This is the true meaning of networking!!

And "Old Broads Waxing Poetic?" What a title!!! :D

I also owe both Robin and Robyn big thank you's for finding you Liza, and of course Alex ultimately brought us all together! This was beautifully written. Now you've gotten me more excited about Old Broads too! I can't thank you enough for your wonderful contribution, and I'm so glad you shared this with the IWSG! See you on Friday!

There's cause for plenty of thanks to go around, including to you, Liza. Your poems are an integral part of our book, and we're thrilled you were willing to share them with us and the world. (Might as well think BIG, right...?)

It is a small world, and I'm so glad to have read your poems - thanks to Susan and Julie. New friends all around. Robyn's chocolate life is hysterical. The compilation is superb and yes you are a published poet as of Friday. Cheers

That is amazing.
Nancy

So so cool. The connections are awesome. And congrats on the inclusion in the anthology.

Hi Liza! I'm another excited Old Broad here. I'm looking forward to seeing how our project turns out. Nice to meet you. :)

Wow, what an amazing story! I love how all these good things led to your poem being published. Congrats!

Wow, that's awesome! Isn't it amazing how that sort of thing works out?

How great Liza! I didn't know you were in the anthology! CONGRATS...

It is for a great cause and I am certainly looking forward to Friday...

Totally wonderful! I love that poem and am so glad that it is getting a wider audience. This old broad will be there with her bells on this Friday!

Congrats on the anthology! It is groups like these, the IWSG and the A to Z people, that make me glad I blog. Writing can be such a lonely thing to do, yet in the company of such great people I feel more connected than ever.

I think that's awesome and I will definitely be back :)

Congrats, Liza! How gratifying for you.