This is my March contribution to Alex Cavanaugh's IWSG.  To read more posts click here: 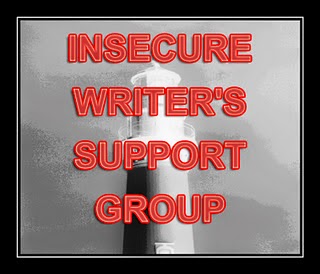 Joyce Carol Oates wrote a book called Faith of a Writer.  I’ll be honest. The book itself didn’t resonate with me, but the title still does.  Especially now.

At the end of 2014, I found myself in a writing slump.  I’d started querying Under the Apple Tree in December, and about that time I had this, Oh-God-that-took-two-years-of-my-writing-life-and-what-if-there-is-no-interest-feeling that dragged me way down.  Intellectually, I knew I needed to get cracking on something else, but the thought of putting more years writing a story that might go nowhere overwhelmed me.  I had fleeting, frightening thoughts.  What if I can’t do it again?

Here's where faith stepped up to the plate. As lousy as I felt, I made myself sit down at the computer five days a week and write . . . something, anything, a brief blog post, a letter to myself, a freelance article, a poem, with the idea that if I kept at it I'd break out of my funk. Anything to climb my way to writing Nirvana again. And as I pushed and prodded myself, a germ of an idea based on a writing prompt I’d had fun with a few years ago niggled its way up.

But still, getting the words out felt like trying to make cold honey pour. I spent hours in the library writing character worksheets in order to find a way to move forward, which ended up taking me backward when I realized the pull-your-teeth writing I had done was a  false-start.  All that time spent developing one character, only to discover a big part of this new story belonged to another. That meant cut, cut, cutting, and starting again, which hurt, but still meant progress.  And  then, as things finally began falling in place I had another hiccup. This time, a legal assumption I made in regard to the plot. Upon investigation, it isn't credible.

But now, I know the fix, which of course means more cutting, and I know this.  It was faith that got me this far. Faith in myself.  Faith in my writing. The belief that if I just keep going, I'll find the joy again.

I think once you have all those hiccups ironed out you will find the joy. I do know the feeling though - what if I can't do it again?

1.) Try to write everyday, like you set out to do. A poem/ blog post/letter to yourself/SOMETHING. It keeps the "creative juices" flowing and I'll tell you, it's EXTREMELY difficult to get back into things if you've taken a sabatical.
2.) That editing process is fun, right? All that cutting makes you think you're doing something wrong. You're not. You're involved in the process. (And believe me, I get that overwhelming feeling all the time.) But, like Dory (finding Nemo) you got to "just keeping swimming, just keep swimming" and have faith. If you work hard and have faith, everything will fall into place. Good luck!

This - "Faith in myself. Faith in my writing. The belief that if I just keep going, I'll find the joy again." - is the truth. :)

Wow, I think those hiccups happen in just about every story I write. There's always at least a couple of big fixes regarding something that either isn't credible or doesn't make sense. I dream of the day when the only fixes will be little ones like grammar or missing words *sigh*

Faith can work wonders. You write therefore you are a writer. Keep it up. As Nora Roberts says, you can't fix a blank page.

Liza,
Keep the faith. Thank you for sharing that, because I think it's something we've all been through. Editing and cutting can be the worst, especially knowing all the work you put in.
Anne

Your words resonate with me, as I'm sure they do others. I've written six complete (though need revising) novels, and I STILL feel this way! It comes and goes. Faith is the key to continuity, to belief in yourself. Writing is balm to the soul, but it is also its nemesis! Thanks for commenting on my blog today!

All that work you've done is progress. Keep the faith. You're doing great!
Play off the Page

So important how you kept on going even when the honey wouldn't pour. Great tenacity to keep going through some blue time.

All those hiccups are part of the process. Good for you to keep working through them. Often writers give up instead of making the changes, so it sounds like you're on the right track to me!

And it's faith to make mistakes. It can feel paralysing to know we might have to cut stuff, but we don't know what works until we write it. And it's all good experience!

Cold honey is hard to pour, but it still tastes sweet!

It's the old, fall off the horse and get right back on, isn't it? You made the right decision and glad you were able to find a way to do it.

Congrats on having faith in yourself.

yep -you gotta have faith. And you've been dealing with a few weather issues. Nothing like trudging through mounds of snow and some doubt. But the thaw is happening-it's slow but it will be worthwhile. Spring and success are just around the corner.

I know that feeling, but you can get through it and the joy will shine through again!

I really think that submission can stir it up in ANYBODY. It is so hard to try to get something out there. We feel inadequate. But good on you for keeping pushing!!!

And after all that work, cutting and pasting, you have a much better story too. How embarrassing if you pubbed it with that legal hiccup in it. Good catch. You are making progress even if it feels you are slogging through quicksand. You will get to the other side safely and be doin' a happy dance!

Ah, there is so much faith in writing. Just filling the blank page is a step of faith. You know what's wrong and how to fix it. That's half the battle. I know sometimes it's daunting for me when I'm faced with major revisions and finishing them seems insurmountable. But once I get to the end, it's such a good feeling.

Some stories need that extra work--and certainly that faith--to get a kick start.

I like the way you look at things. To be honest, I've had my faith rattled this month and the only thing I could do was write. Somehow when I write everything seems easier. Good luck with book 2 :-)

Anna from Shout with Emaginette

Good for you for sticking with it. Writing definitely requires determination and dedication.

I've found that every time I start a new project, there's an adjustment period. It always comes out rusty and I need to have faith that it'll get better. No, I didn't forget how to write since the last time I wrote a story. Great post!

Self-doubt and outside rejection can drag us down for sure. That's when the faith has to take hold to pull us through. You just gotta keep going. It's like life I guess. It is life.

Arlee Bird
A to Z Challenge Co-host
Tossing It Out

I have sticky notes all around my monitor meant to inspire and uplift me. The one I see most often is in the center at the top and it simply says "FAITH". We all take leaps, both big and small when we pour out our hearts and souls onto a blank page. But the truth is, when we try to do something else, it is never the right fit, and it sucks the life out of us until we honor our muse and have faith in ourselves.

I'm glad you've still been hard at work on your manuscript! You're like The Little Engine That Could chugging along saying, "I think I can. I think I can." I know you will, and all of your hard work will pay off! Good luck, Liza!

If you keep writing you'll find the joy again.

Wow. That was powerful (and something I really needed to read). This post resonated with me.

Thanks for a great inspiring post. So insightful too. All the best!

Each hiccup leads you one step closer to hitting the end. It may not feel like it, but it does. Don't stop. =)

That's wonderful! Faith will always give you that much-needed push and huge dose of inspiration. Keep going!

Thanks for visiting my blog, by the way. Oh, and I followed you. :-)

I don't know if this helps (or doesn't), but this sudden lack of faith in yourself can come at any stage in your writing career. I'm sure a lot of people think I'm successful because I got a 3-book deal with HarperCollins -- and yes, I was lucky and overjoyed and it has been a terrific ride. But I have also written two other manuscripts which were rejected by editors I have worked with and received nothing but silence from other editors on submission. (Not even a rejection. Silence. As in, they didn't bother to read it.) So, as my 3-book deal comes to an end, I am also facing that situation of investing a couple years in something new, not knowing if anyone will want it, wondering if I am already washed up! (But as you mention in your post, the key to getting past that insecurity is to find the JOY in writing a new story and soldiering on.)

Hi Liza. I'm glad you're making progress. Sure, writing can be tough and those hiccups do take time to fix but with the time and effort you pour into your work, it shows how much you really care. And when you truly care about what you do, you will find your joy again. Best of luck. :)

For some reason, I used to think that "writing" meant a creative person sat down in front of a computer, and words just flowed onto the page. And then an editor would make a few changes, fix a few grammar and spelling error, and - voila! - a book was born.

I've become a little smarter since I used to think that...but until I read your post today, I didn't realize just how much work is involved in the process of writing. Making cold honey pour...I like that expression. :-)