The pond down the street is frozen and as I drove by this afternoon, a lone ice fisherman stood far in the distance. Though we’ve lived in our house almost nineteen years now, the novelty of ice fishing still intrigues me. I assumed it was a sport practiced by people who live in the way north, New Hampshire, Maine or Vermont and never witnessed it until we moved here. Some years, we see pockets of enthusiasts, sitting on boxes or standing over the holes they’ve drilled, hoping for a tug on a line. Other winters the pond doesn’t freeze at all, so they don’t come out…and for my uneasy mind, it hasn’t been cold very long this winter.


Seeing the solitary guy way out there unnerved me today, and reminded me how different this country is, from state to state, as a result of geography and weather patterns. In one of my previous incarnations, I traveled frequently for work. It was fun to see places I never had been, North Carolina, Tennessee, Illinois, South Dakota.  Whenever I was in a different state, I made sure to turn on the local news as a way to capture the flavor of the area I was visiting.

One winter, during a trip to Minnesota, after dinner one evening I returned to the car, aware that the temperature was so low (and there is no way to say this delicately, but I'll try), the, um, moisture inside of my nose froze—bitter enough for this softy from Massachusetts, but apparently not cold enough for the locals. The highlights of the news that night focused on the number of snowmobiles crashing through the ice due to mild weather. At first, I laughed. Where I live, the ocean keeps things temperate and we'd never consider snowmobiling on a pond. Are you kidding me? Then I considered the results of that thin ice. Gulp.

We do tend to think we are invincible and years ago, when we had an extremely cold, no questions asked kind of winter, we took our daughter down to our pond. She was the only one with skates and my husband and I slid along beside her. Bumping into friends, we set out for a leisurely stroll/skate…all the way across the frozen surface, making our way to shores I have never been to since. We didn’t think about it twice. Then, a few days later, a man decided to go for an early morning skate and the sun blinded him. He slid off the edge and into open water. But for a neighbor who heard his screams, an off duty policeman driving down the road, and a canoe positioned in the right spot, the story would have ended in disaster.

A few years after that, a young girl visiting relatives in town decided to skate out toward the rock in the middle of the pond. Not understanding that the ice near the area would be weaker, she turned a teenage boy with a hockey stick into hero that day.

As a result of these stories, I don’t go near that ice anymore. But in spite of my fear, I can’t get over the crystalline beauty of my pond glinting in the yellow and silver winter light. As the sun got low this afternoon, I drove down with the camera to take a picture.

Out in the middle a solitary skater circled, holding a hockey stick. As he slapped a puck toward the rock and dove after it, my stomach churned. Focusing on him with the camera lens it occurred to me that if anything happened, there would be nothing I could do from that distance, other than dial my cell phone. But at least there was that. I stayed…turning toward the car and then back to the skater, frozen on my own hard ice.

I didn’t realize I was holding my breath until another skater glided toward him, charging for the wayward puck. 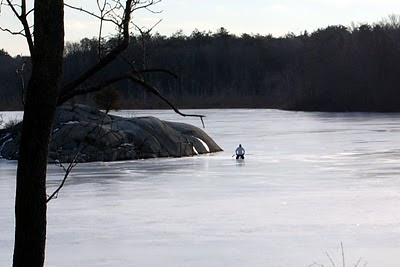 Ice and snow are things we Australians know precious little about. Ice fishing is unheard of here. It never, I repeat NEVER gets cold enough. It snows in some parts way down south. Queensland is known for sunshine, oh, and lately, a whole heap of rain!

I'm afraid of the ice too, but I admire skaters and ice fisherman for their hardiness and bravery and outdoorsy enthusiasm. Love the picture....the black woods around the white ice.

And a comment regarding your post on bread pudding. Yes, it'd be great if they dropped packages of bread pudding instead of bombs.

Since I really really hate the cold, I could never understand how anyone could engage in any activity that purposely puts them at risk of freezing their tush off! My husband used to winter hike the Presidential range in NH, and try as he did, he could never make me understand--aside from the unbelievable view and man against-nature satisfaction. Glad I have a big imagination and get my satisfactions from activities that can be done from the warmth of my cozy home...

My experience with frozen lakes(ponds) is limited. Well, limited to none. The cold fractures my being. But, i can look at picture of the cold and ice all day long. Soothing sorta,,,well, from inside looking out. This was soothing.

I share your respect for ice. As a teenager I was trying to learn to ice skate when a huge crack ran through the ice from one side of the pond to the other. Everyone skated to the banks and there I stood in the middle of the cracked, frozen pond unable to move. Friends yelled for me to get to the bank. Humiliated and terrified I got down on my hands and knees and crawled to the edge of the pond. Needless to say, I never learned to ice skate.

This post brought that long-forgotten memory back. Thanks for the time trip, I think.

Oh my. I would be tense too! I remember watching some movie where someone went under the ice and could be seen bumping along underneath with a current, but couldn't be saved. It has stuck with me. Not sure I could venture out, inspite of assurances. Eeeek.

How scary. The chances of saving someone who falls through a small hole in the ice are slim. Usually they become disoriented and cannot find the opening again. And the water is so cold that their limbs very quickly become unable to move. I was going to say that I can't imagine what that must have felt like, except I can.

It is beautiful/scary...and too cold for me.

I visited the Highlands of Scotland in winter once and was amazed at the sounds the ice made at the edges of the lochs, shifting in the loch-weed. Surreal

I learned to skate on a frozen pond. I miss the sounds it made as it shifted. Terrified it would open and swallow me whole.

I was just saying to my mother I wish I could teach Monster Baby to skate. If I thought the weather would hold together for more than 3 days, I'd make a small rink in the yard.

You are so good at putting us right there on the ice with you - and I love the picture. I've done things that afterward I think, why in the h-e-double hockey sticks (as we used to say) did I do that!