A week ago my husband and I attended a party down by the harbor. It ended late in the afternoon and as we left, we stepped out to an east-facing view and stopped, both of our mouths forming silent O’s. Though blocked by the building we had just departed, behind us, the sun, ready to set, had painted everything in front of it in a wash of pink. Rose-colored clouds scuttled across the horizon. Through the bare trees lining the snow-edged harbor, the windows of an estate out on the point flared in reflected light. Lobster boats shifted under purple shadows as they pointed toward a frigid wind.
Shivering, we stepped into the car, but taking note of the time, I vowed to return with the camera over the course of the week to catch the nuance of that winter light. Yesterday, I got my chance. A few minutes before sunset, my daughter and I drove a friend to her home near the water. Careful for icy spots, I pushed harder than I should have on the accelerator, anxious to get to the harbor in time.
After we deposited her friend, my exasperated daughter said, “Just go down to the beach. You’ll get a great picture of the sunset there.” She was right. I would have. But as I negotiated the car away from where an orange sun was inching toward the marsh plains behind the sand, I explained that I was trying to catch something more obscure. It’s easy to go for what is most apparent, the quick fix, the sunrise; a sunset, the view from a high perch.  Sometimes though, all that splash distracts us from a quieter beauty.
We arrived at the harbor just as the sun dropped behind the surrounding trees, in enough time for her to see the windows on the estate blaze up. As the reflecting glow crayoned the clouds hovering over the lobster boats, I think she might have grasped a piece of the lesson I learned last week.
Once in a while, it’s okay to forego the obvious. Look around. You never know where a stunning picture might reveal itself. 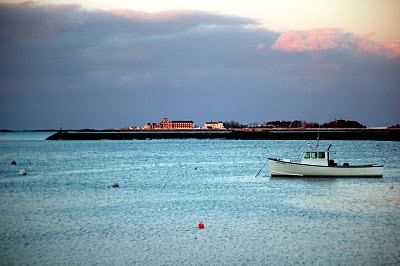 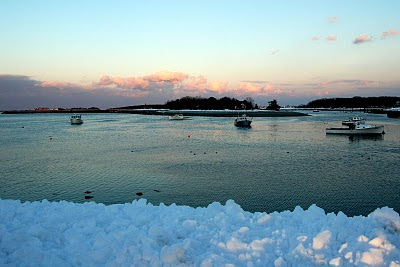 This is so true in many parts of our lives. And especially true in writing. Thank you for the inspiration!

You knew what you were after - and you got it. Great photos!

The golden light of late day is my favorite time, especially when it catches and transforms something (like the estate). Gorgeous, Liza.

as well as making my coffee have a grin, your photos make me aware that I should "look" more often at what is around us all.

Magical light in these picts. Thanks for posting and getting them!

Oh wow. There is something so mysterious in reflected light...

Isn't that the truth. It's easy to see the obvious...so much so it is overexposed. But in looking for those rare moments, an original is born.

Gorgeous photos! The light is amazing. And you're right, inspiration is everywhere. All we need to do is open our eyes.

Wow, these are beautiful photos... thank you for sharing :)

I love this post Liza. The more I learn about photography the more I 'see' the world around me. Beauty is everywhere.