As you may have surmised from two of my recent posts, the location of our house, facing east, situated on the west side of town, at the bottom of a rise and surrounded by trees, makes it hard to capture a clear picture of dawn. Thus, my chilly, early morning excursions. Occasionally I get fixated on things; this week my quest was to catch a freeze-frame (literally) of winter dawn. I was marginally happy with Monday’s results, although people who live closer to the water or get up earlier must see more spectacular vistas regularly. The rest of the week remained overcast and stormy which was why I failed to realize what was happening to the west, behind the house.
But post-shower yesterday morning, regardless that I was wandering around without glasses, I couldn’t miss the silver light of the full moon glaring into the bedroom window, which, come to think of it, would explain last night’s outlandish dreams. Once again, sans coat this time, I found myself trudging outside while temperatures hovered in the teens—with the wrong lens on the camera, but there wasn’t enough time left to rummage for the telephoto. Jiggling from one leg to the other, with my arms hugging my chest, I waited  for the moon to tuck itself away in a yellow ball underneath the ledge behind our house,  In the end though, it was too darn cold. Kicking the snow off my boots, I stomped back into the kitchen and heated up my oatmeal, thinking at the least my seat at the breakfast counter would offer a perfect view as the moon puddled below the horizon.
I’m sure it did. But as with all things involving the camera and nature, you need to pay attention.  At 6:35, my daughter came out, we began chatting, and I missed it.

What things compel you to disrupt your routine? 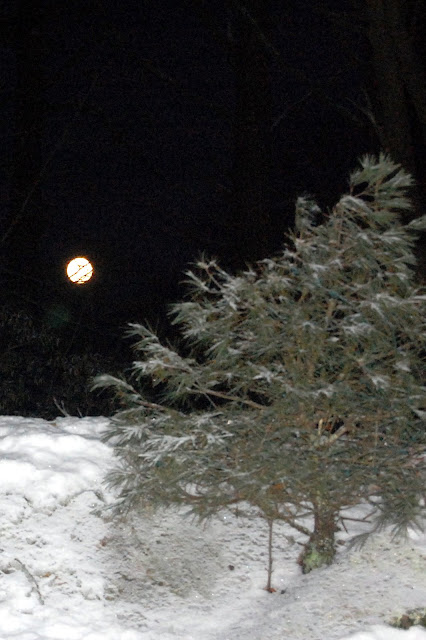 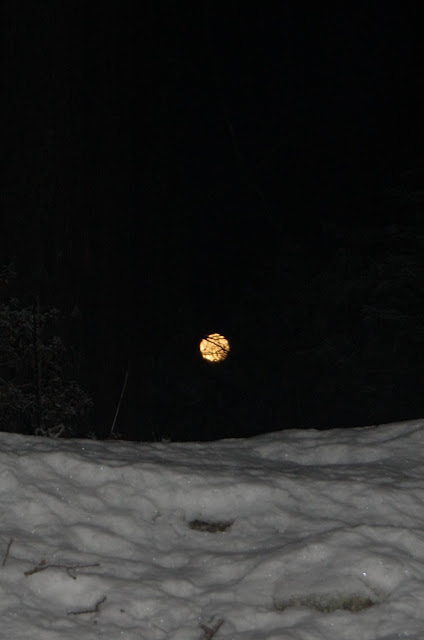 I love those photos! So ghostly beautiful.
Like you, I'll disrupt my routine for anything show nature puts on.

Lovely photos. What a great moment you captured!

I'll disrupt my routine ANYtime to go for a ride in our '57 Chevy!

These moon shots are fantastic. Thank you so much...

These pictures are beautiful! Thanks for sharing.

Like you, I am a photo junky. I'll often stop the car to get a good shot. I'm also a car person who will go out of my way to take a longer drive on an especially nice day in the convertible. Wherever friends gather, that will definitely stop my routine. We just never know when we're making a memory or a new connection.

Cool shots! And it's usually my wife who forces me out of my routine.

For various reasons and for many years I stopped taking photos. I've only just got back into it very recently, Simply having a little 'point and press' in my bag encourages me to change my routine - I go to a better spot to catch the light, stop and enjoy, and wonder if it'll be possible to use the shot in a blog piece.
Great shots, thanks.

Loved ones always compel me to interrupt routine :)