In light of last week's grumpy-weather-related post bemoaning the missing hummingbirds, it seems only fair to acknowledge that this little guy showed up at our feeder the same day. 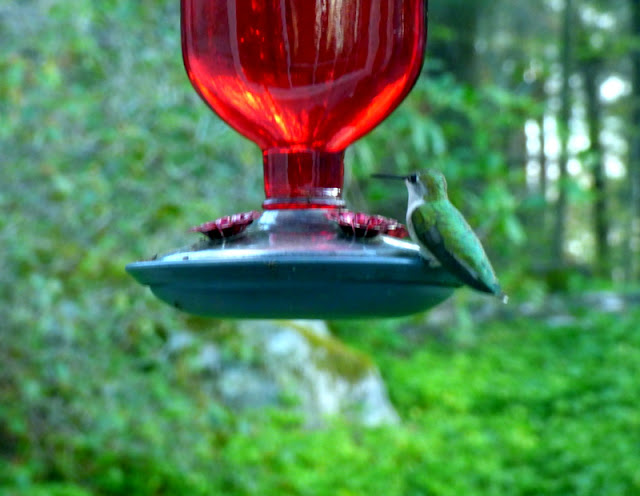 In addition, we had this visitor, who spent two days on our front covered porch, leaving quite a mess on one of the wooden rocking chairs.  I was home alone and kept hearing a tap-tap-tapping, that had me wandering around, concerned for a bit.  It appeared he was intrigued with his own reflection, or else my dining room table, which he/she could see from his position.  There's a nest from last year inside one of our front bushes, but from what I can tell, it's empty, and as of the weekend, the bird had disappeared, leaving a messy, "calling card" behind.  Not sure what was going on there, but we removed the chair from the porch.  It's time to pull out the power washer. 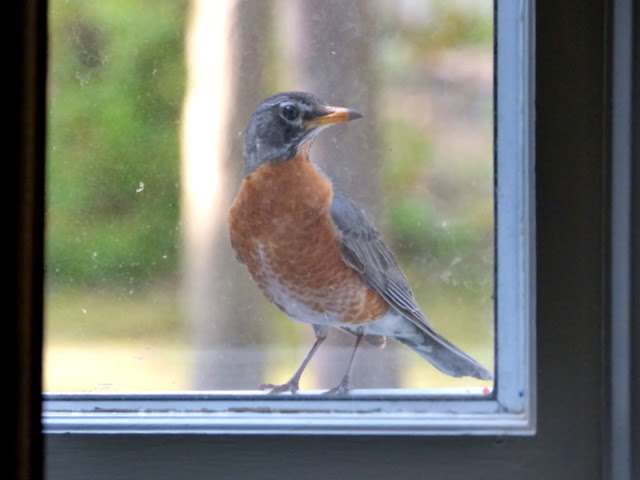 And...no word of a lie, AS I typed this, I heard tap, tap at my front window.  One robin stood lookout on one of the holly bushes and the remaining rocking chair shows signs of visitation. 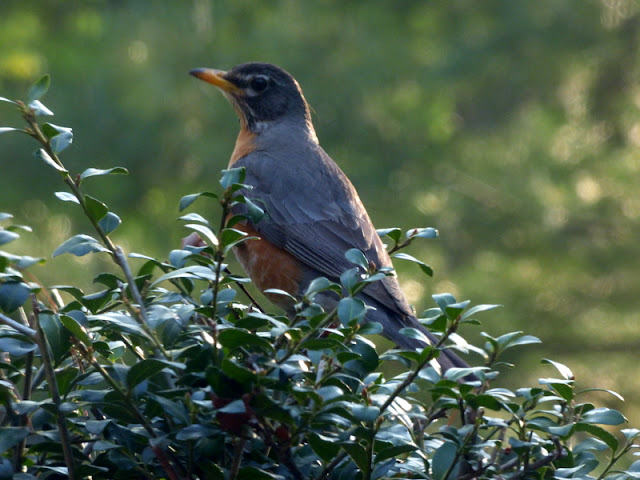 So, off I went for the camera and while I watched, a car drove by, the birds took off and one fluttered into the window before making it around the corner, the same noise I'd been hearing.  Later, I heard all manner of thumps and rustles.  It's either over the picture window, or in the gutter, but somewhere at the front of our house, nest-building is in process.

It's now past May 15.  As I type, the outdoor thermometer displays 45 degrees and inside, the furnace is still blasting.  At least nature is displaying some hint of spring.

Glad you have hummingbirds again.
Persistent robin. Maybe he just wanted to come in and watch cable television?
Be sure to stop by today - surprise for you!

Hi Liza - good to see the hummingbirds ... while the tap, tap, tap is a little disconcertaing - but thankfully we can turn the heat up or down ... and nature is certainly doing its thing ... cheers Hilary

The doves give me that look. "Hey. Fill the feeder."

We've had robins fly towards one of our windows as if trying to attack their own reflection. I like seeing the birds in the yard, but it can be unnerving to have them knocking on the windows! I'm glad to hear your hummingbird has returned.

I don't think I've ever seen a hummingbird sitting down. Consequently any pictures of hummingbirds turn out to be blurry blobs. Bird watching is so much fun - they all seem to have distinct personalities.

Hi Liza, thank you for visiting my blog. Nice to see the hummingbirds. And the photographs are lovely.

As for your comment on my blog about not spending too much time world-building, but just writing the story and letting the world-building happen along side. I guess that's our writing style. Yes, I tend to have several drafts but I guess until the writing is polished we need to revise and edit.

glad the hummingbird arrived just in time, and other birds are tapping to get your attention. I know you are impatient, but spring has to take its own sweet time. Maybe you need another jaunt south - just a quick fix.

I think of humming birds as a sure sign that summer is about to arrive., except this year. I guess he/she didn't get the memo that spring has been cancelled.

Monday here was like winter again. I had to wear my coat! I had a humming bird come to my window where I have a geranium sitting. I think he was rather annoyed he couldn't get to it.

How lovely to see the hummingbirds! We don't get the beauty in our parts but lots of finches, blackbirds, hawks and the native ducks and swans. I hope the cheerier weather shines down in your parts :)