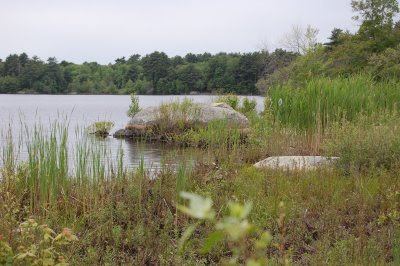 The last time I visited the Aaron River Reservoir, our daughter was a tween and my husband and I brought her with a friend to Wompatuck State Park which borders the dam, for a bike ride. My father told stories about short-cutting the trip from his year-round-home, through what is now this parkland on his way to a summer house in North Scituate years ago, but with the advent of World War II, the military converted the area to a munitions depot; to my knowledge vehicular traffic has been banned ever since.

We taught our daughter to ride a bike in Wampatuck because wide roads built to transport military vehicles provide a perfect setting for wobbly two wheelers, and once she rode well, it was an easy pedal past old bunkers, through shadowy tree lined lanes, where we emerged blinking on sunny boulevards leading to the water’s edge. On that last ride though, the girls raced ahead of us and threw their bikes into a patch of poison ivy in their haste to stand at the shore. We hauled them home for a scrub with Fels Naptha (my grandmothers’ remedy for poison ivy exposure) and for some reason have never gone back.

So, when my friend issued an invitation to join her and her two dogs at the reservoir, which happens to feed the pond and town-water-supply a few hundred yards from our house, after such a long absence, I jumped at the chance to return. We met at a new location for me--a direct entrance via a straight shot about a mile down the road from my street, no bicycles or winding trails required. Bemused to learn how easy it was to get to the spot, I followed my friend through an opening in the chain link fence, climbed the checkerboard of a cement grating positioned over rushing water, and hiked through knee-high timothy and clover to the top of the aqua duct. The dogs followed their own agendas--after a toss of his green tennis ball Grady, the golden retriever, plunged spread-eagle-style into the water. Skitch, a petite black and brown mixed breed, took a delicate sip of water before trotting off to nose a trail of seductive smells behind us.

In her book, The Narrative History of Cohasset 1950-2000. Volume III, Jacqueline M. Dormitzer explains that the creation of the reservoir occurred after a twelve year battle that began when wells supplying our town no longer provided for a growing population. My husband remembers viewing the boulder strewn bottom of Lily Pond during drought times; a picture our daughter and I can only imagine, given today’s green depths. Engineering in order to dam the Aaron River commenced once the water department gained environmental permission to flood part of Wompatuck; the project reached completion in 1978. We now boast a surplus of water even during the driest months through an extensive lake that spreads over 133 acres, fringed by pines and oaks, outlined with secluded coves.

Because it’s a water resource, a sign at the entrance (that Grady can't read) forbids power boats and swimming. With the exception of a large house, recently built on a distant hill in a bordering town, only roofs and windows blocked by ivy covered fences indicate the presence of the few homes nearby. As we stood at the edge, a kayaker dug a repeating pattern of circles with his paddle; hawks glided overhead and the cark of seagulls vacationing inland echoed from the middle of the lake.

Turning from the water, I looked straight ahead as we measured our steps over the granite edge of a now-dry waterfall above a boulder strewn gully--exhaling once we reached the meadow at the end. (A path from the parking area works for those less adventurous, meaning me, the next time). Beyond the field, a trail meanders through the woods, trees bend toward their clear water reflections and point leafy fingers toward a flat stone outcrop. There we paused, listening to bleating bullfrogs, the distant moaning of seagulls and breeze-driven chop lapping at the shoreline below. For a moment there was no man-made noise, only nature shifting and settling itself, the sound of our own deep breathing, and wiggling Grady, who bound up joyfully to flap his wet fur, showering us with a fresh water spray.
Posted by Liza at 1:29 PM