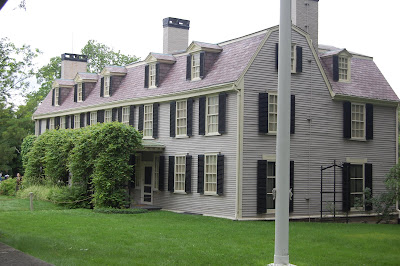 Peacefield, the ancestral home that John and Abigail Adams bought after he returned from his stint as ambassador to France and was elected the second President of the United States, is open for tours in Quincy, MA. The home remained in the Adam’s family until the 1900’s and became property of the National Park Service in the 1940’s.

The tour guide who took us around the property had been working for at the site since she was thirteen, (she is in her mid to late 20’s now) and offers an informed and entertaining tour based on her own research. Grinning, she recounted how John's and Abigail's son, John Quincy Adams, an accomplished, educated and brilliant man as well as the sixth President of the United States, was, err, lacking in certain social graces.

There was no upper hall in the original home. Therefore, upon waking at 4:00 in the morning, rather than walking down the stairs, across the long front hall and up another set of stairs to get to his paneled study, he thought nothing of cutting through the guest room in his night shirt, carrying his lantern, even when it was occupied. Imagine spooning in a nineteenth century feather bed and waking to the President of the United States strolling through.

Eventually, his British born wife, schooled in a bit more etiquette, arranged for a back hall to be built on.
Posted by Liza at 8:19 AM