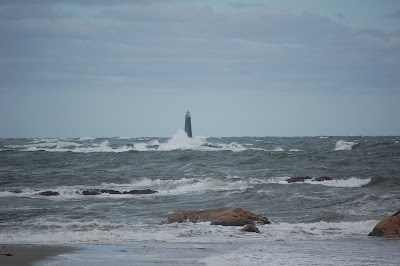 On a sight-seeing tour with out-of-state visitors in a driving rain yesterday, we stopped at the beach and saw the ghost shadow of Minot’s Light, shrouded in fog, a mile out to sea. Our daughter explained the history of the lighthouse; that the first Minot’s Light was made of iron beams driven into to the ledge off of Cohasset and Scituate in a feat of optimistic engineering. In 1850 two assistant lightkeepers lost their lives in a storm similar to yesterday’s tempest, when the lighthouse collapsed into the ocean.

Yesterday, rain blew sideways with the wind off the sea and waves exploded like geysers up against the rocks surrounding the beach. I caught myself thinking about those two assistant lightkeepers; how they would have known that the lighthouse was not safe, holding on tight while it rocked back and forth, pounded and shook, shuddering with each wave; that they would have looked at each other in the eyes, knowing that unless some miracle occurred and the seas subsided, they wouldn’t make it through the night.

The replacement lighthouse is made of interlocking squares of impermeable Quincy granite; each mountain of water that crashes against it wedges the blocks closer together. It towers there, out beyond Barrel Rock, beyond the Grampuses and we count on it to set our bearings, recording numbers as it flashes 1-4-3. And then once in a while a storm reminds us that a long time ago, Minot’s Light wasn’t situated there, solitary at the edge where it has stood impervious, as natural in our horizon as the rocks surrounding it; protecting sailors for 159 years.
Posted by Liza at 7:55 AM