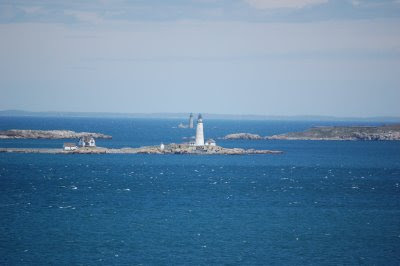 Fort Revere sits on Telegraph Hill, a promontory in Hull, Massachusetts over looking the Brewster Islands which populate Boston Harbor. I knew there was an old fort in Hull currently doing business as a park, but had never been there until yesterday when we discovered what we have been missing. We arrived by a circuitous route, both figuratively and literally. Our ultimate goal was not to investigate the Fort, but to catch a glimpse of the high tech sailing machines taking part in the nine-month, across the world Volvo Ocean Race, the most recent leg of which arrived in Boston last week.

The boats were scheduled for a Boston Harbor race yesterday afternoon. After viewing news stories about the event we were intrigued, but none too keen on driving into Boston to confront masses of likewise interested humanity; we opted for creativity instead.

Packing up binoculars, the camera and telephoto lenses we followed Nantasket Avenue in Hull, snaking our way toward Hull High School at the “Gut” (where Hull peninsula sticks out into Boston Harbor). Winding over twisting roads through Hull village onto the slim causeway that is the only thing between the ocean and Hull Bay, we noted a stone tower up a steep hill and headed toward it. Climbing up past ranches and condos, we turned up Farina Road and detected a sign marking the entrance to Fort Revere.

Telegraph Hill contains the remains of two military installations, Fort Independence, a Revolutionary War installation, and Fort Revere which, according to the information booth located at the park, was built in the late 19th century and used primarily as a training facility for solders that were later sent overseas. The Fort was decommissioned in the 1940’s but resurrected by the town of Hull in 1976 for America’s Bicentennial. The tower opens on a limited schedule for viewing (the first Saturday of the month); the grounds also include a military museum and picnic facilities.

As we exited the car, we gasped at the outstanding views toward Boston and Graves Lights, the Brewster Islands in the foreground and beyond to the North Shore. Turning our heads, we saw expansive views south back toward Nantasket and Cohasset as well as Hull Bay which in the spring sunshine yesterday appeared tropical green. The park contains several picnic tables, fields for picnic blankets and an information board with postings of summer activities (yoga and outdoor movies) offered by the Trustees of the Parks.

Alas, we were at the wrong angle behind greening trees and could not see sailing action out of the city. We made the best of our visit though, treading carefully down steep steps to explore the crumbling remains of gun embankments and cement bunkers built into the side of the hill. Unfortunately, vandals appear to visit this location regularly; the bunkers are covered with art deco graffiti and evidence of parties lay in the beer cans and wrappers tucked into dark corners. The brick rooms are eerie and intimidating; the park closes at sunset, and I’d find no reason to remain behind.

On such a glorious day though, it was easy to shake off the gloom of the bunkers as we climbed back up to the earth rooftops and strolled through the knee high grass. There amid brilliant sunshine we braced ourselves against gusty breezes and in awe of the extensive views took photo after photo of Massachusetts Bay. It was clear that this location offers some of the best views south of Boston. We left knowing that in spite of the graffiti and the fact that we didn’t see what we came for, this would be the first of many visits.
Posted by Liza at 1:29 PM