Squeaking this One Out 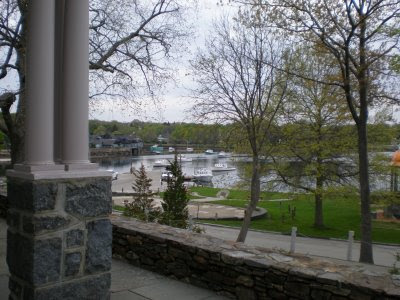 After volunteering with the seniors which is the scheduled activity that gets me up and out on Mondays; I returned home knowing that at the top of the to-do list was this blog for which, over the weekend not a single idea percolated. In hopes that it would resurrect my absent creativity, I opened up Pen on Fire by Barbara DeMarco-Barrett and leafed through the pages, sure that one of her writing prompts would generate an idea. Per her suggestion, I researched a topic on the Internet, choosing the town owned Lightkeeper’s house which happens to be the location where we hold the Monday senior coffee cafes. Perched upon a hill over which daffodils planted by the garden club currently bloom, high above lobster boats swaying slowly at their moorings, the location is a frequent site for receptions and parties. On Google though, I found little related to it (hence my picture above). There must be no town supported marketing for the hall because there is no dedicated website explaining how the house (to my knowledge, the former home for the keepers of the Minot Ledge Lighthouse) came to its current incarnation.

It felt like a dead end to me (or at least involved more research than I had time for today), so I looked to Barbara for another exercise and discovered a suggestion to create lists on various topics in order to spawn writing ideas. The only list in my brain at that moment was called: “All of the things the cat does that annoy me.” Hmmm, not relevant to this blog, I’m thinking. So, again at the suggestion of Barbara, I wound up the timer for fifteen minutes and started free writing—typing whatever came to my brain. Oh dear. For the most part, you don’t want to know. But then, I did get this:

“Today is May 4th and I just realized that this is my brother-in-law’s birthday. He is forty-nine and that sounds young. Someone asked me today how I feel about being fifty. My answer was that it wasn’t worrying me until I lost my job and other than in that context, it still doesn’t. I do fret though when I think of people looking at my resume and instead of reading my name, seeing the word “Dinosaur” printed on top. In that regard I feel like I’ve already inhaled a huge portion of the pizza-pie that is life, and swallowed a lot without chewing.

The woman who asked me the question happens to have two years on me and four almost grown children. She remarked that she finds her age “liberating” which I understand. As moms of “getting-to-be grown” children, life becomes less about providing for our offspring, driving them places, focusing on their educations or simply fixating on them. As our kids gain independence, the time we spend with them becomes more give and take and conversational; the fact of being a parent and in charge takes a backseat to the development of a mature relationship with our children. Unexpectedly, in addition to being mothers we find ourselves traveling back to that almost forgotten time before we started raising families. I don’t know if I’m saying this right, because there is nothing in my life I love more than helping my daughter grow. The reality though is that being in active parenting mode is so far in importance beyond anything else in the world, that other things tend to fade away. Perhaps the next stage is that some of those things that have traveled off to the shadows will find their way back into view.

I may be fifty, but age is so much less about years and more about perspective. One of the women at the senior coffee this morning came in ramrod straight, smiling and greeting everyone with warm eyes, her white hair meticulously combed page boy style. At these coffees, as I shake hands with seniors I don’t know, I try to soften the “professional recruiter” grip that has been my trademark for so many years. This woman though, stepped over to me in her spring yellow jacket and white tailored pants, reached for my hand and gave it a robust pump as strong as my own. When we commented about her lovely coat, she chuckled and confessed: “You know what? This coat is thirty years old.” It turns out she’s ninety and among other things, still models clothes for a charity fashion show. As I watched her greeting her friends and pouring her own coffee from the linen covered refreshment table, I was relieved to see how much more there may be yet to come."
Posted by Liza at 4:29 PM